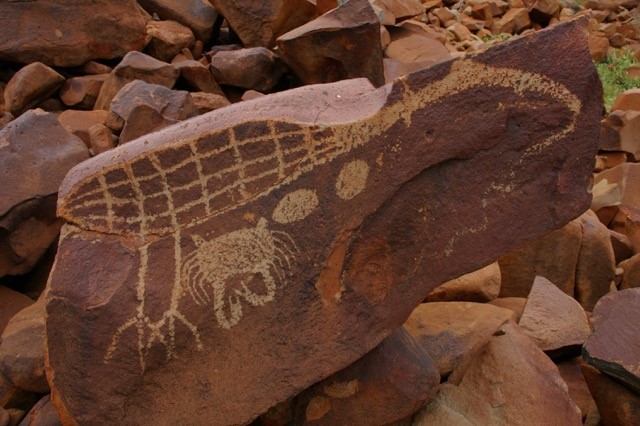 Since the 1960s the ancient petroglyphs of the Burrup peninsula / Dampier Archipelago, estimated now at 45,000 years old, have had to struggle against increasing industrial development.

In a recent scientific paper published in the peer-reviewed international Journal of Archaeological Science: Reports, Professor John Black & others have argued that the acid load emitted by the current industries – Woodside and the Joint Ventures LNG plants, and Yara International’s fertiliser plant – already exceeds international standards and has most likely caused acidic damage to the surface of the rock art.

Imagine then, the dread faced by Friends of Australian Rock Art (FARA) knowing that Yara and its partner Orica are just awaiting final approval to start up their massive new Ammonium Nitrate plant, which is predicted to emit 25.2 tonnes a year of ammonium nitrate particles – equivalent to sprinkling fertiliser over the landscape and so increasing voracious microbial growth within the rock carvings, effectively destroying them ‘within a generation’, according to Professor Black.

But the commitment of new Labor Premier Mark McGowan to seeking World Heritage listing for the Dampier Archipelago gives FARA some hope that he and his Environment Minister, Stephen Dawson, will seriously look at imposing stricter conditions on Yara Pilbara’s projected emissions.

Likewise, Woodside’s recently announced plans to increase its LNG production via the Joint Ventures plant should be carefully scrutinised to ensure that its environmental footprint is not made worse than it already is…zero emissions should be the responsible goal in this precious but fragile cultural precinct.

Should you wish to see these amazing petroglyphs while they are still visible, consider joining FARA’s annual trip to the Burrup on 22-30 July. For further information contact Judith Hugo on [email protected] or on 0439 090 321.