The Fairy Tern is a small, coastal seabird, found between the Dampier and Recherche Archipelagos. They measure about 250 mm from their bill- to tail-tip, and in peak breeding condition, they feature a dark black head cap and bright orange bill and legs.

Fairy Terns can often be seen nesting and raising chicks on sandy beaches of the mainland and nearshore islands or close to river mouths in the spring and summer months. Their nest consists of a shallow scrape in the sand, enhanced with small shells or stones, which helps to camouflage eggs and chicks. Their diet consists, almost exclusively, of small bait fishes such as sprats, anchovies, and garfish, which are captured by plunge diving.

The exposed nesting sites on beaches can make them vulnerable to vehicles, foot traffic, pets, and feral animals. In recent times, a loss of breeding habitat combined with disturbance from intensive human-induced activity has resulted in reduced breeding success. It is estimated that there are fewer than 3,000 pairs of Fairy Terns in WA. 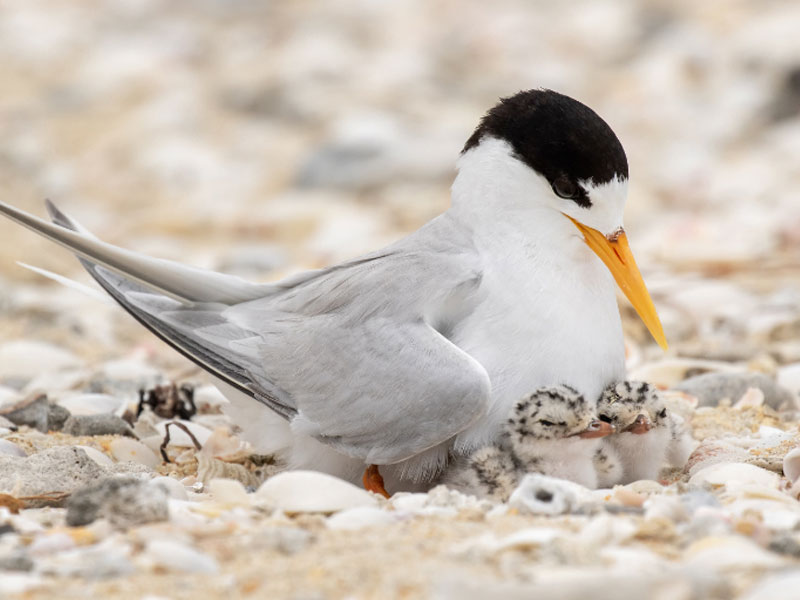 Launched in 2016, the Fairy Tern Network supports promotes solutions to protect the threatened Australian Fairy Tern across their breeding range. The Network provides a platform for communication and the coordination of conservation actions among researchers, land and wildlife managers, non-government organisations and citizen-scientists.

A guide to Fairy Tern Sternula nereis Conservation in South-Western Australia has been developed to support community groups and land managers in their pursuit to deliver improved outcomes for Fairy Terns. The guide takes a holistic perspective to conservation and focuses on the process of finding solutions at a variety of locations and on different spatial scales. The guide was compiled by Dr Dunlop, assisted by contributions from members of the Western Australian Fairy Tern Network. The publishing of the second edition in 2018 was supported by the Northern Agricultural Catchment Council.