"Across its entire range in Australia’s western and southern rangelands, Australian sandalwood is on a path towards extinction in the wild."
[Prolific or precarious: A review of the status of Australian sandalwood. R. McLellan et al, The Rangeland Journal, CSIRO Publishing (2021)]

Our beautiful slow-growing, long-lived, oil-rich, fire-sensitive native sandalwood is on a dangerous downward trend in the wild, accelerated by climate change and unsustainable overexploitation by WA's government-owned Forest Products Commission (FPC). S. spicatum also grows in South Australia but is already listed as an endangered species there.

Sandalwood ‘pulling’ (where the whole live tree is uprooted) and export began in WA in the mid-1840s, soon after the establishment of the Swan River colony. As an unregulated colonial ‘boom’ industry it resulted in almost total decimation of native sandalwood from much of its original range across WA's south west and Wheatbelt. Sandalwood’s remaining substantial wild populations are in the semi-arid 'pastoral' zones of inland WA.

Under the current annual extraction quota set by the WA State government in 2016 - i.e. 1,250 tonnes of live ('green') sandalwood per year, FPC uproots around 40,000 mature/old growth sandalwood trees each year. Each one of these slow growing small trees is likely to be well over 100 years and probably well over 200 years old. A further 1,250 tonnes of dead sandalwood is also available under the quota. 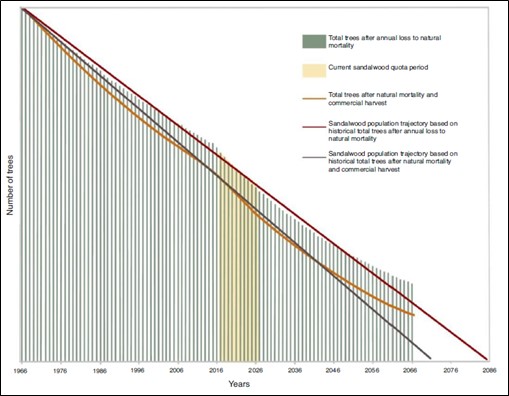 The decline of sandalwood in the wild. The FPC produced the original version of this diagram but included a ludicrously optimistic v-shaped line suggesting that there was going to be a miraculous improvement in regeneration and recruitment of sandalwood during the current 10 year quota period. This more credible version above from the McLellan et al paper.

FPC contractors literally rip these ancient, ecologically- and culturally- significant trees out of the ground with no consideration of any values other than their economic potential. For a variety of well known reasons (discussed in the paper cited above and links below) there is little or no natural regeneration and recruitment, so each one of these trees is effectively irreplaceable.

It’s a bit like hunting whales or killing elephants for their tusks. 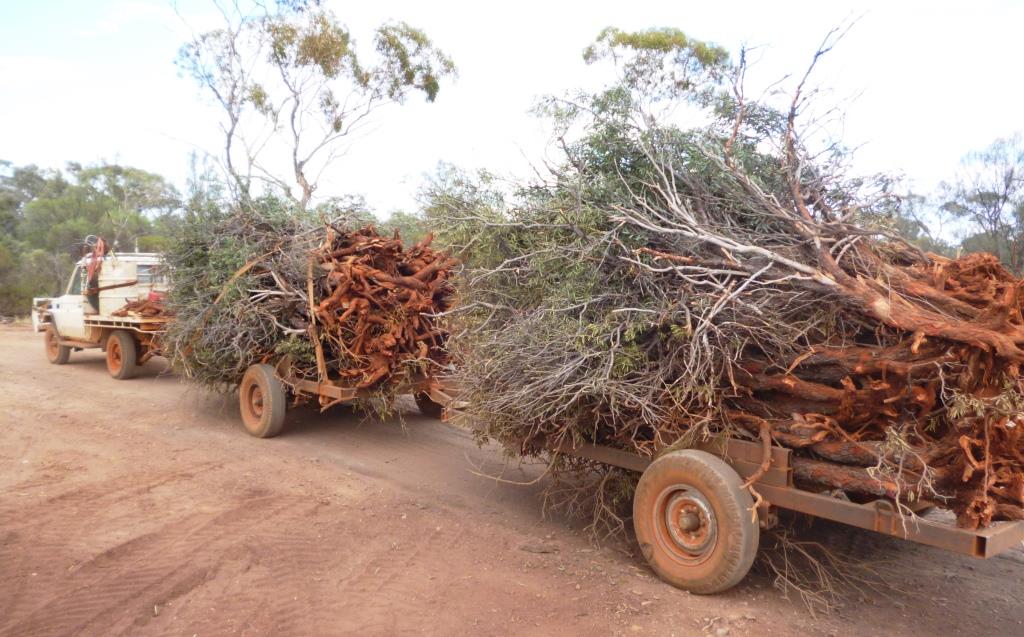 Uprooted sandalwood trees, hundreds of years old, carried away by Forest Products Commission contractors near Kalgoorlie.
This isn't 'harvesting', it's a once-off mining operation of a threatened species - akin to killing elephants for their tusks and whales for their oil.

Of course being the foresters they are, FPC is desperate to keep its wild-take sandalwood pulling business going for as long as possible. Unlike its soon-to-be-halted logging of south west WA's native forests, FPC actually makes a profit out of exploiting wild sandalwood!

And just as with native forests, FPC is doing all it can to hold back the sandalwood plantation industry, which has over 20,000 hectares of S. spicatum plantations established and is already producing 1000+ tpa in WA's Wheatbelt (not to be confused with the ‘Indian sandalwood’ plantations in the Ord irrigation area in the Kimberley). FPC wants to keep delaying the transition to this huge sustainable resource for as long as possible to maintain its profits from the wild harvest (the WA Government owns all wild sandalwood trees in the State, irrespective of who owns or manages the land).

Sandalwood was once prolific and highly valued across the lands of many southern WA First Nations peoples. That is no longer the case due to coloniser's greed and the government’s ongoing unsustainable colonial approach to forestry. As usual it is the First Nations people who have lost most and benefited least from the 175 year plunder of sandalwood and it is they who must be enabled to manage any ongoing sustainable wild-take business. 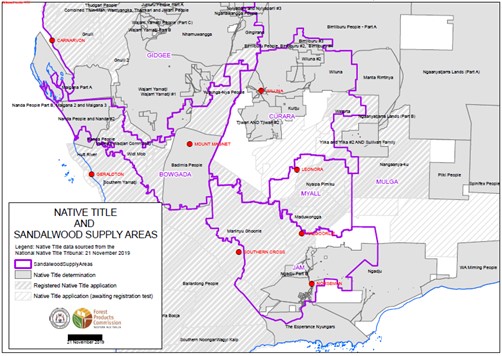 The FPC should be stripped of any ongoing involvement in sandalwood, and focus solely on looking after its poorly managed softwood pine plantations in the south west. A consortium of community organisations (inc. TWS, CCWA, WAWS), Aboriginal enterprises (e.g., Dutjahn), plantation companies (e.g., WA Sandalwood Plantations), and other experts have offered to help the WA government make the transition to a truly sustainable industry.

We just need a brave and science-based government to call a halt to the current situation that has put sandalwood on a precipitous downward trajectory towards being extinct in the wild.

The WA McGowan government must not under any circumstance cave-in to allow another 10 years of FPC-run wild sandalwood mining, when the current quota expires at the end of 2025. The current Minister responsible for the FPC is Hon. Dave Kelly MLA: [email protected].

BUYER BEWARE: Please do not purchase WA sandalwood (Santalum spicatum) products unless they come from either certified plantation sources or a certified Indigenous-owned and operated wild sandalwood business.

Peter Robertson grew up on a sheep farm near Kojonup in south west WA. In 1981 he rode his bicycle across Australia to Hobart to join the Franklin River campaign, helping to organise the Franklin River blockade - where he subsequently got arrested. Since then he has worked on successful environment campaigns across Australia, including the WA Old Growth Forest campaign, the Tiwi Islands land-clearing campaign (NT), the James Price Point gas hub campaign and the campaign to protect the Helena Aurora Range (Bungalbin) from mining. Currently based in Darwin he is working on campaigns to prevent gas fracking in the Kimberley and NT. Peter is passionate about WA’s unique and beautiful native flora, like sandalwood, and deplores the continued mindless destruction of what is left of our natural environment.

Feel free to contact Peter to ask for further information on any of the matters mentioned above: [email protected]

The Conservation Council of WA (CCWA) has welcomed the publication of a draft sandalwood biodiversity management programme, but has expressed concern that time is fast running out to protect these native trees....
Read More

By Dr Claire Greenwell (CCWA) and Isobel Armstrong (Clean State)   In early September, CCWA’s Citizen Science team and volunteers headed back out to Bowgada on Badimia Country, in WA’s mid-west, to...
Read More

The WA Fairy Tern Network – formed by the Conservation Council of WA (CCWA) in 2016 – has been recognised at the 2022 Western Australian Coastal Awards for Excellence in the Science...
Read More