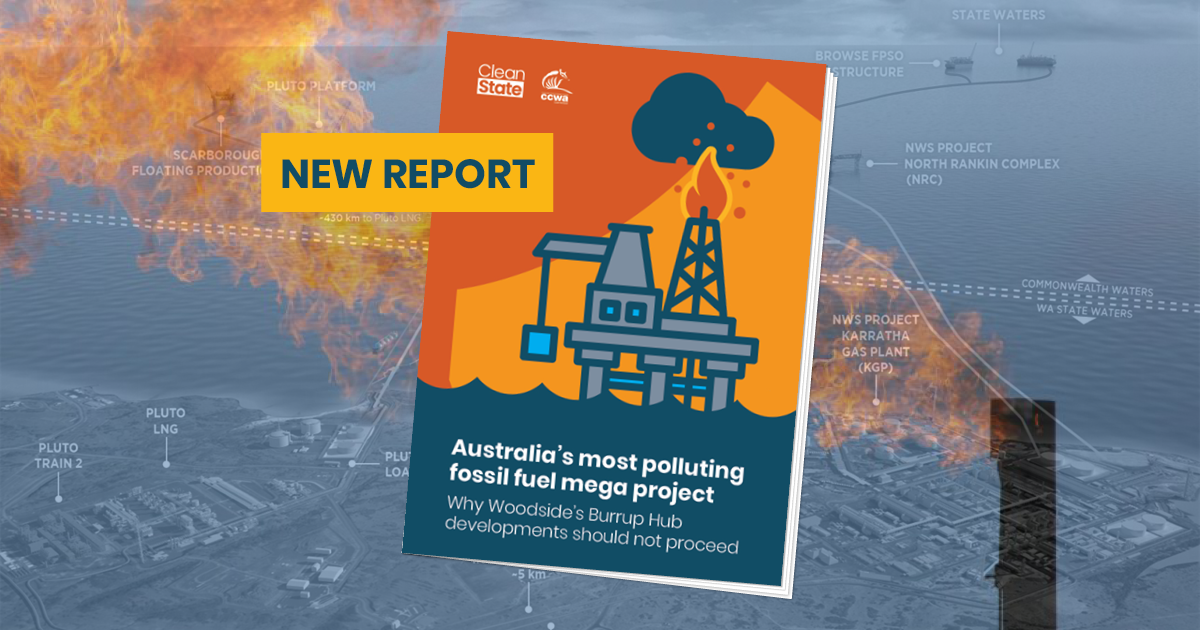 CCWA Director, Piers Verstegen said the information in the report, entitled “Australia’s most polluting fossil fuel mega-project” will assist Governments, investors and shareholders to gain an independent understanding of the substantial undisclosed risks associated with the mega-project.

“This report raises the alarm that the Burrup Hub is an extremely risky venture that will do enormous damage to our climate and environment with very few benefits for West Australians,” said Mr Verstegen.

“This is the first time the overall impacts of the Burrup Hub project have been examined, and it is an absolute horror show.

“If approved, the Burrup Hub would be the most polluting fossil fuel project ever to be developed in Australia with a total carbon footprint of around 6 billion tonnes over its 50-year life, and combined annual emissions of 139 million tonnes – roughly four times the annual pollution of the proposed Adani coal mine.

“The Burrup Hub would also produce the dirtiest gas in the world with an emissions intensity of almost 1 tonne of carbon pollution for every tonne of LNG produced from the Browse Basin.

“Woodside has proposed no credible efforts to reduce carbon pollution from the project and has ignored state and national climate policies and targets. These targets would be unachievable if the project were to proceed unless taxpayers paid billions of dollars to offset Woodside’s emissions.

“The staggering carbon footprint of the Burrup Hub translates directly into investor risk, which has not been adequately disclosed to the market by Woodside. Despite Woodside’s efforts to hide this information, shareholders, investors and the broader community have a right to know the truth about this project.

“The Burrup Hub goes directly against public commitments on climate change from the project’s joint venture partners including Woodside, Shell, BP and BHP. In the report, we have named companies involved in the project as well as Woodside’s major shareholders to warn them about these risks and make their involvement visible.”

Mr Verstegen said that the myth of gas as a solution to climate change did not stack up. “LNG took over from coal as the biggest driver of global emissions growth last year. Every reputable authority on climate change including the IPCC and IEA says gas use must decline, not increase, in order to achieve Paris Agreement targets. You can’t burn your way out of climate change, and any company that claims otherwise is misleading, deceptive and downright dangerous.

Mr Verstegen, along with policy analyst Chantal Caruso, will hand-deliver a copy of the report to Woodside tomorrow Perth time. “Clearly Woodside’s CEO and senior Executive are having trouble adding up the figures on carbon, so we are more than happy to show them what a disaster this project would be if it were to proceed.”

Access the report and explainer via the links below: