Protection of nature and wildlife was a major focus for CCWA when it was formed 50 years ago, and biodiversity protection continues to play a central role in our advocacy agenda today. With the impacts of climate change, logging, land clearing, fire, feral species, and pollution taking their toll, what remaining biodiversity we have left needs our protection more than ever.

Our strategic focus remains the achievement of long term protection for all wildlife and biodiversity through better laws, expanded protected areas, and improved land management. At the same time, CCWA and local communities will have to continually step in with place-based campaigns to defend parts of our natural environment from damage and destruction. This year, the Save Beeliar Wetlands campaign was one such high profile example. 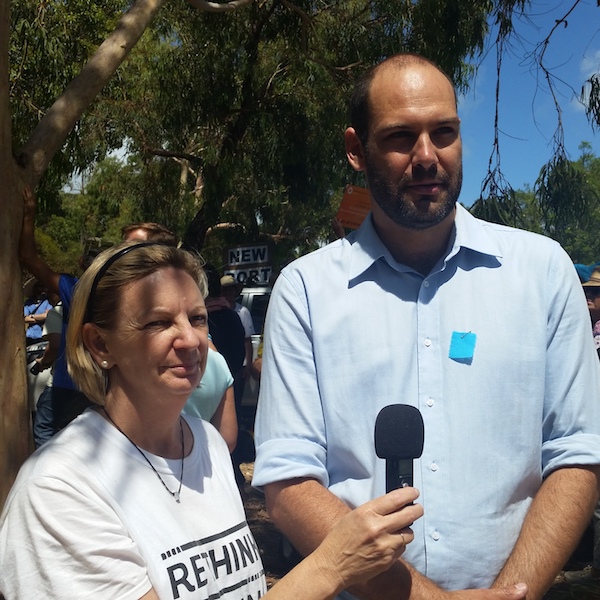 In the months leading up to the State Election, CCWA partnered with Save Beeliar Wetlands, Rethink the Link, and thousands of community members to protect the Beeliar Wetlands from the proposed Roe 8 highway extension in what became one of the most significant and dramatic environmental campaigns in WA history.

The result was an incredible community victory which shaped not only the project itself, but the outcome of an election.

The campaign was a genuine community effort with many individuals and organisations playing critical roles. Here at CCWA we:

While some of the most important bushland in the metropolitan area has been badly damaged, what we have gained is a community powerfully united by a shared passion for the collective task of protecting their environment and cultural heritage.

Through the campaign, neighbours met for the first time. Strangers from across political, cultural, and economic divides worked together in ways they had not previously imagined.

From the very beginning of the planning process, to the felling of the last tree in the Beeliar Wetlands, almost every element of the Roe 8 project revealed serious flaws in the policies, laws, and agencies that are supposed to protect our environment.

Thanks to Roe 8, the inadequacy of environment and heritage laws in WA are no longer an abstract concept discussed only by environmentalists and academics. Thousands of Western Australians have now witnessed firsthand the results of weak policies and inadequate nature protection laws.

As the Beeliar Wetlands begin to regenerate, CCWA has been working to ensure our state’s environmental policies, laws, and planning processes are also repaired and strengthened to provide the real protection that our environment and communities need.

Today, the restoration of Roe 8 road reserve provides an opportunity to re-imagine the area as a nature and wildlife corridor that connects communities across its length. We are pleased to see the Cockburn Community Wildlife Corridor organisation take shape and step forward to realise this vision. CCWA is also represented by Vice President Tim Barling on the Roe 8 Rehabilitation Working Group established by the McGowan Government to guide the rehabilitation efforts.

The vast majority of the state’s area - including some of our most important ecosystems and environmental values - is covered by Pastoral Leases and Unallocated Crown Land. The potential to reform the policy and legal framework governing the management of these areas has presented significant opportunities for improving environmental management and protection across the outback.

CCWA has continued to advocate for reform through coordinating the Partnership for the Outback together with Pew, Bush Heritage Australia, and The Wildflower Society. Through the Partnership for the Outback, CCWA has been active in engaging the community and government on improved management solutions for the outback, and the need to overhaul the governance of these vast and unique areas to ensure a sustainable future for outback communities and environments. These efforts were instrumental in securing strong election commitments from WA Labor on pastoral land reform, and CCWA is now working with the State Government to see these commitments implemented.

This year, CCWA also played an active supporting role in the Create Ranger Parks campaign which was instrumental in securing a $20m commitment to an expanded Aboriginal Ranger program from the McGowan Government.

Strengthened, contemporary wildlife and biodiversity protection laws for WA have been a long term priority for the conservation sector, and CCWA has maintained an ongoing focus on this goal.

Following the passage through parliament of a new Biodiversity Conservation Act in 2016 that was fundamentally inadequate and completely lacking in support from the environment or scientific community, CCWA has turned our efforts towards building support within WA Labor for further legislative reform to improve protection for our wildlife and biodiversity.

CCWA worked closely with the Labor opposition to develop amendments that would improve the legislation, and these amendments were recently endorsed as part of the party’s policy platform at the at the WA Labor Conference. We are now working with Environment Minister Stephen Dawson and the State Government to progress these amendments, while also seeking to ensure the strongest possible regulations are formulated under the existing legislation.

The Strategic Assessment for the Perth Peel Region (SAPPR) has continued as an important area of focus for CCWA during this year. The SAPPR is one of the most significant and ambitious environmental policy initiatives in WA in recent decades, and presents an opportunity to secure significantly expanded conservation estate, address some of the worst threats to biodiversity in the region, and promote the development of a more compact and sustainable city.

After highlighting the inadequacies of the Barnett Government's Green Growth Plan, CCWA worked with the Labor opposition to build support for a complete overhaul of the plan.

Since the election of the McGowan Government, CCWA has convened a process to reach a consensus position on the SAPPR by the state’s leading conservation groups, which has now been presented to the new government. We will continue working with the Department of Premier and Cabinet on this process to secure the best possible outcomes for the environment.

Marine protection in state waters continues to show significant progress, with concrete steps made towards the realisation of a Great Kimberley Marine Park to be managed jointly with Traditional Owners.

Working with Pew Environment Group, The Wilderness Society, Environs Kimberley, and other partners, CCWA has played a key role in securing community and government support for marine protection in the Kimberley region.

The Like Nowhere Else campaign secured significant election commitments from both political parties, and we are now working with the McGowan Government to see those commitments delivered. This will eventually see the creation of a truly world class network of marine and terrestrial protected areas in the Kimberley.

CCWA continues to be an active partner in the Save Our Marine Life campaign. The focus of this campaign has been defending the Commonwealth network of Marine Protected Areas (MPAs) during a review commissioned by the Abbott Government. This has involved community outreach and technical input during the review process.