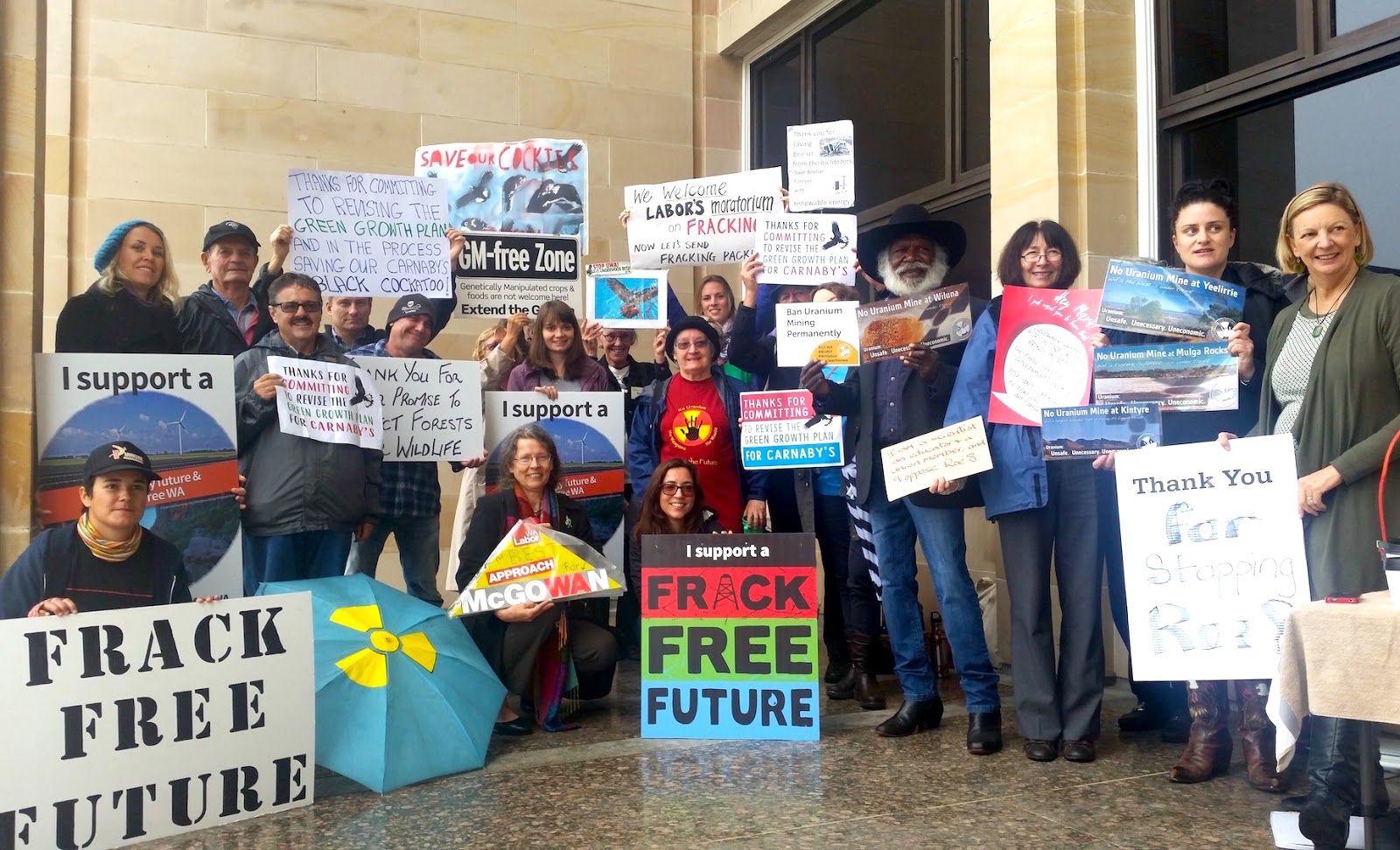 May has been an encouraging month for WA’s environment, thanks to the hard work of people like you! Whether you celebrated our progress on plastics, switched your super to a fossil fuel free fund (try saying that quickly!), started a local action group on fracking, spoke out against uranium mining in the Goldfields, or participated in one of the 120+ Eco May activities across the State, there’s been lots going on!

As if that weren’t enough, some of you also welcomed our new Government last week by hosting an MP breakfast to acknowledge their environmental commitments and thank them for the action they have already taken since the election. The main takeaway? Our MPs actually asked us to keep up the pressure, as our petitions and emails enable them to represent us in Parliament. So let’s keep it up!

Here are some of your highlights narrated by the CCWA team, as well as a taste of what’s to come!

A message from Piers about plastic pollution:

“We have all seen the images of plastic polluting impacting our marine life, so it was good to see some real progress on plastics this month. On 2 May we welcomed Environment Minister Stephen Dawson’s announcement that he supported a plastic bag ban and a recycling refund scheme, and I spoke to Channel 9 on the same day. On 23 May, World Turtle Day, I attended the Cottesloe Council meeting with local eco-hero Lisa Jane Hills and researcher Erina Young, to encourage the Councillors to support a ban on the release of helium balloons. Their vote was unanimous! And on 29 May, we celebrated the Town of East Fremantle and City of Fremantle moving to implement a ban on plastic bags as well. As for what CCWA has planned - we’re launching our own plastics campaign soon, so keep an eye out!”

A message from Meredith about Future Super:

“Did you know that many Western Australians are unaware that their super funds are investing their hard earned money in gas fracking and other polluting fossil fuels? This is why I’m so excited to let you know that there's one super fund that's been rated 100% fossil fuel free - Future Super!

Making the switch can be a powerful statement against the fossil fuel industry in WA – plus, Future Super has offered to donate $150 to CCWA on behalf of everyone who makes the switch on our unique page. Members of the CCWA community have already started switching - will you switch too, or find out more?”

A message from Karen about Frack Free Future:

“It was great to meet some of you at our film screenings this month - and thank you to those who signed up to join a local action group afterwards. These groups are known as FLAGs - Fracking Local Action Groups - and it’s exciting to see the doorknocks, screenings, and stalls that you’re already planning! By starting or joining a FLAG in your area, you’ll connect with other locals who are passionate about stopping fracking, so it’s a great way to make change - and make friendships! I’m at [email protected] if you’d like to know more.”

A message from Mia about Uranium Free WA:

“A few of us just did a whirlwind tour of the Goldfields to touch base with some of the people fighting against uranium mining. There is a lot of concern over the company Vimy resources who have been pursuing the Mulga Rock uranium mine 260 km north east of Kalgoorlie without proper heritage surveys and with no consultation. Check out the photo album from the trip here. The Mulga Rock project has State and Federal Government approval - but still requires a range of other approvals and licenses. Find out more about Mulga Rock here.”

This year’s Eco May was our biggest ever, with more than 120 eco activities registered and promoted across the State by individuals, groups, and councils. From Kununurra to Esperance, you enjoyed activities around healthy living, conservation, revegetation, Aboriginal culture, the arts, and more! What was your favourite part of Eco May?

Thank you for everything you do for our wildlife and environment - we’re so glad you’re in our community.