Conservation groups have congratulated the McGowan Government on the lightweight plastic bag ban coming into force yesterday, as a significant step towards tackling WA’s plastic pollution. 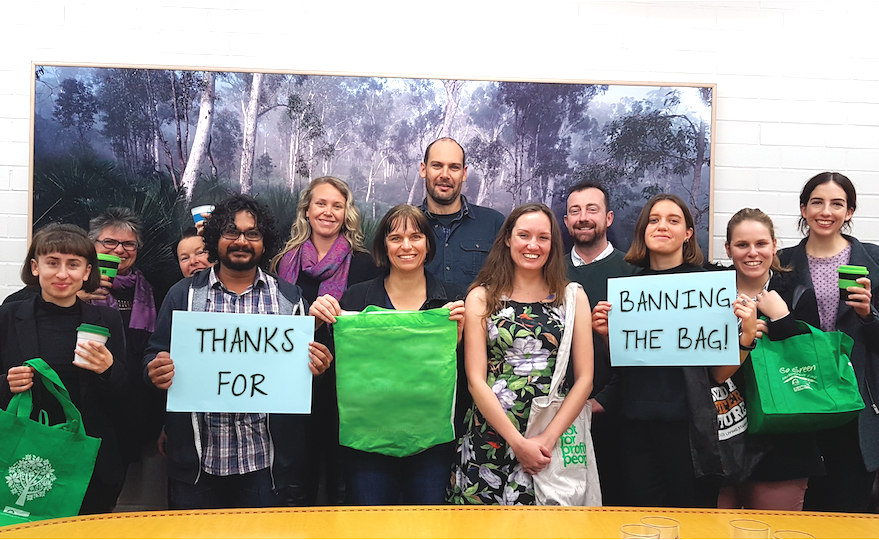 Photo: Staff and volunteers from CCWA, the Environmental Defender's Office, and the Wilderness Society of WA

“The plastic bag ban will result in far fewer lightweight shopping bags becoming litter or pollution in the marine environment, and we congratulate Environment Minister Stephen Dawson and the McGowan Government for fulfilling this election commitment.

“The plastic bag ban does more than just reduce pollution from plastic bags – it helps build awareness and understanding of the broader problem with plastic pollution in the WA community.

“With so many better alternatives available, Western Australians are already embracing the plastic bag ban.

“The McGowan Government announced that lightweight plastic shopping bags would be banned after the 2017 election, and the community has been eager to see that implemented. However it was important to get the design and implementation of this policy right, including consulting with the public and retail industry.

“We are pleased that the same approach is being taken with the 10c Recycling Refund Scheme. These reforms are worth taking the time to get right, and to avoid problems further down the track.

“We have come from a long period of inaction on waste and plastic pollution here in WA, so there is a lot of catching up to do. It is pleasing to see that Environment Minister Stephen Dawson has been able to get his agency working and delivering on these commitments, and we hope it will establish momentum for further action.

“The plastic bag ban is just the beginning of a longer term process to reduce the single use plastic. We are encouraged by Premier McGowan’s recent comments in this regard, and the Conservation Council will continue to work with community groups, local councils, and businesses to build support for action on other single use plastics.

“Takeaway cups and food containers, plastic drinking straws, helium balloons, and other forms of single use plastic packaging are among the common items that our community wants to see action on.”