10 years ago this week the Barnett government lifted the long-standing ban on uranium mining in WA. The Barnett government promised “$5 billion to WA’s gross State product” and “$450 million a year.” Industry proponents promised jobs and bragged that uranium will be like “iron ore on steroids.” 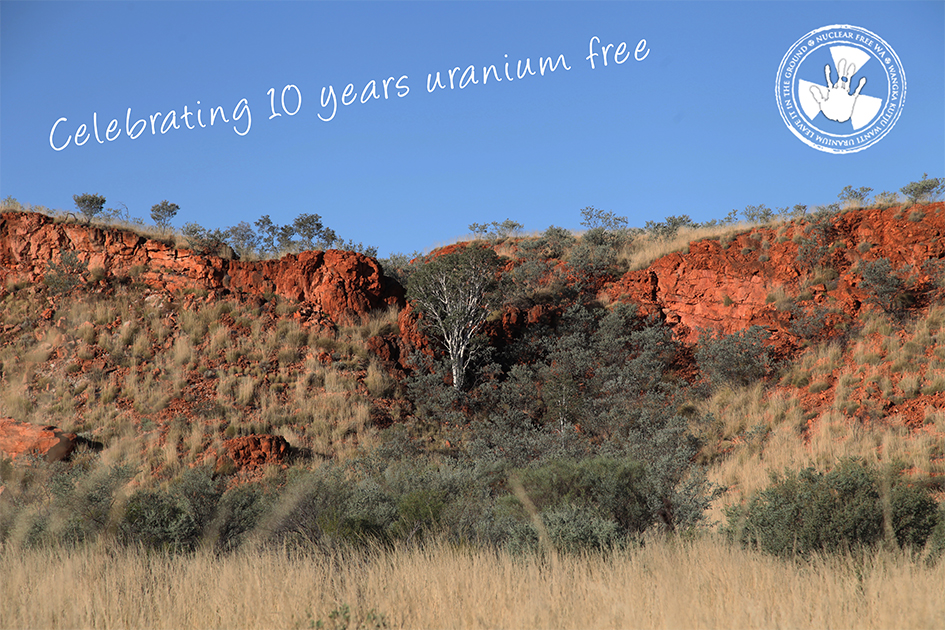 The reality has been far more like morose miners on methadone. After a decade that has seen sustained Aboriginal and wider community resistance to mining plans, the uranium price plummet in the wake of Fukushima and a surge in renewable energy production, there is not a single operating uranium mine in WA.

Uranium exploration companies were a dime a dozen but just four projects surfaced as having potential in WA. Three of them raced through the environmental assessment process under the Barnett government and emerged with environmental, but not final, approvals just weeks before the state election in a clear move to wedge the incoming Labor government.

The McGowan government felt the wedge and let the four mines with partial approvals continue ‒a clear breach of Labor's pre-election promise not to allow mines to proceed unless they had full approvals. But the sustained low uranium price and community opposition has thwarted plans to develop any of the four mines.

Cameco has written off the entire value of the Kintyre project, Toro Energy has shelved its uranium plans and is now trying to strike lucky with gold, Cameco’s Yeelirrie project is the subject of a legal challenge by the Conservation Council of WA and three traditional owners and then there is Vimy’s Mulga Rock project. Vimy released its Definitive Feasibility Study for Mulga Rock earlier this year and the company is reportedto be “confident of securing contract prices of about $US60/lb this year or next for delivery in 2021 when it hopes to be in production with Mulga Rock.” There was supposed to be an investment decision by July but instead Vimy was handing out pay cuts and scaling back or bunkering down for the sustained lull in the uranium price (currently around $US30/lb).

And while Toro is looking for gold ‒and other uranium companies have diversifiedinto medicinal marijuana production or property development ‒Vimy is hedging its bets by setting up a subsidiary to explore for base metals.

Globally there are 115 nuclear reactors undergoing decommissioning‒double the number under construction. The International Energy Agency is warning about the lack of preparation and funding for a "wave of retirements of ageing nuclear reactors" and an "unprecedented rate of decommissioning". A growing number of countries are phasing out nuclear power, including Germany, South Korea, Switzerland, Belgium and Taiwan.

The world's most experienced reactor builder, Westinghouse, went bankrupt last year and the debts it incurred on reactor projects almost bankrupted its parent company, Toshiba. After the expenditure of at least $A12.4 billion, construction of two partially-built reactors in the US was abandoned last year, and the only other reactor construction project in the US was almost abandoned this year after cost overruns of $A14 billion.

No wonder that nuclear lobbyists are themselves acknowledging a "crisis that threatens the death of nuclear energy in the West" and are already writing eulogies about the "ashes of today's dying industry".

Nuclear power's crisis has direct and obvious implications for the uranium industry. Only two uranium mines are operating in Australia ‒Olympic Dam and Beverley Four Mile ‒while mining has ended at the Ranger mine in the NT and ore stockpiles are being processed while work begins on a $1 billion rehabilitation.

The low uranium price is a symptom of a growing trend away from nuclear, a trend matched by increasing investment in renewable energy. Renewables generate 2.5 times more electricity than nuclear reactors worldwide, and the gap is growing rapidly. Even Dr Ziggy Switkowski ‒ who used to be nuclear power's head cheerleader in Australia ‒ recently said that the window for large nuclear reactors has closed and that the cost comparison is rapidly diverging in favour of renewables.

It is with great optimism we look to great technological advancements made in renewable energy and hope to see the end of old and dirty energy like coal and nuclear. So we sigh with relief that there are no operating mines at Kintyre, Yeelirrie, Wiluna and Mulga Rock, that uranium from WA is not on its way to processing plants or reactors destined to become waste, a toxic legacy.

And we can celebrate those special places and unique ecosystems and continue, with watchfulness, to monitor the activities of those companies who have not yet seen the writing on the wall that uranium is uneconomic, unwanted and unsafe.