A case of Traditional Owners, Environmental Law and Extinction

Currently in Western Australia there is a landmark legal challenge by three Tjiwarl Traditional Owners and the Conservation Council of WA (CCWA) against the WA State Government and Canadian company, Cameco, in a case to prevent the extinction of multiple species and protect Aboriginal lands from uranium mining at Yeelirrie. Recruiting one of Australia's most eminent legal minds to their case, the Yeelirrie legal challenge will be one of great significance for WA environment and the Traditional Owners.

Controversy over the environmental approval of the proposed Yeelirrie uranium mine led to CCWA and three Tjiwarl Native Title Holders filing for a judicial review in the Supreme Court of WA on the 4 July 2017.

The Yeelirrie legal challenge is an important case and it is also a very brave action. Taking the current State Environmental Minister Hon. Stephen Dawson MLC and a multi-national mining company to court is a very big deal.  It is complex, costly and frankly can be nerve-wracking for all involved from the Traditional Owners, the legal team and the team at CCWA.

One of Australia’s most eminent legal minds, Bret Walker QC, agreed to represent CCWA and the three Traditional Owners in the Yeelirrie legal case. Mr Walker QC has identified this court case as highly important not just for Yeelirrie, but for the effectiveness of environmental law and protection across the state.

The appeal was heard in the Supreme Court of Appeals on the 5 March 2019.

This content is to help you through some of the complex themes and stories that are a large part of this court case.

When governments ignore the laws that are there to protect nature and wildlife, it is up to communities to stand up and hold them to account.

The Supreme Court challenge is seeking to overturn the environmental approval for the uranium mine issued in the final days of the Barnett Government against the advice of the WA Environmental Protection Authority and the Minister’s own appeal decision.

Ignoring appeals from Traditional Owners, thousands of community submissions, and the EPA’s own warnings of extinction, the Yeelirrie uranium project was granted approval by former Environment Minister Albert Jacob.   The Minister has given no reason for his decision, and we argue that this decision is not acceptable.

This calculated decision would prevent the new Labor Government from fulfilling its election mandate to stop Yeelirrie and other uranium proposals from proceeding.

The legal case concerns the Yeelirrie area, a former cattle station nestled below the Montague Range in the far north of the West Australian Goldfields. Yeelirrie is home to a unique population of subterranean fauna, including 11 stygofauna and 5 troglofauna species endemic to the Yeelirrie paleochannel. These species are thought to have evolved over millions of years in complete isolation from other subterranean communities, making them truly unique. There is no question that the proposed uranium mine would have severe impacts on the population, and would likely cause the extinction of multiple species that exist nowhere else on earth.

During the environmental assessment of the proposed uranium mine, the WA Environmental Protection Authority (EPA) found that the project would likely cause multiple extinctions and recommended that it should not proceed as a result. This recommendation was upheld by the Office of the Appeals Convenor and accepted by the former Environment Minister, who then proceeded to approve the proposed mine anyway. The approval of the Yeelirrie uranium project directly contradicts the science, evidence, and advice of the EPA and the findings of the Appeals process. It knowingly breaches three core objectives of the Environmental Protection Act, which sets a dangerous precedent that cannot go unchallenged.

This approval decision was made by a Minister at a time where they knew they were going to lose office in the upcoming election. It was a time of destruction,and a hostile atmosphere towards the environment.  The Government made environmental approvals to deliberately bind the incoming Labor Government to allow this uranium mine to go ahead. It was a shocking decision and shocking times that still have future implications. The decision was made at a time that would not allow any community scrutiny to be applied.

Minister Jacob who made this decision was obsessed not only with uranium but he was also obsessed with extinction.  Not only did he make the first decision under Environmental Law in Western Australia to approve the extinction of species but he actually wrote in extinction into a new piece legislation that his Government passed.  He actually wrote in the God Clause to allow extinction. It is extraordinary!  That allows a Minister under the Biodiversity Protection Act to allow extinction to occur. This legislation was passed by this Minister.

This was a Minister that was determined to allow extinction through his decision making under the Environmental Protection Act and also to write it into the fabric of WA’s environmental laws.

CCWA continues to challenge this under the Yeelirrie legal case but also through other forms to call for law reform to get better protection for our wildlife and biodiversity and get rid of that God Clause out of Biodiversity Protection Act in WA.

This case highlights the urgent need for environmental law reform in WA, to establish effective legal protection for all creatures great and small and to prevent wildlife extinction.

The Yeelirrie uranium mine proposal

The Yeelirrie uranium project proposed by Canadian uranium company, Cameco, includes constructing a 9 km open mine pit with a total clearing footprint of more than 2,400 hectares of native vegetation, using 8.7 million litres of water per day to mine and process uranium ore, and generating 36 million tonnes of mine waste that would remain radioactive for thousands of years at Yeelirrie. There are many environmental risks and impacts around the Yeelirrie uranium mine proposal, with the extinction of multiple species most clearly at odds with WA environmental law.

The Yeelirrie uranium mine proposal still requires environmental approval by the Commonwealth Government, and we continue to call on the Federal Minister for the Environment to ensure that no Commonwealth approval is issued that would allow extinction to occur at Yeelirrie.

Opposition to uranium mining at Yeelirrie

Mining of the Yeelirrie uranium deposit has been strongly and consistently opposed by Traditional Owners for more than 40 years. The proposal threatens the area which is part of the Seven Sisters Dreaming songline. The word “Yeelirrie” translates to the word “Yullala”, which mean to weep or mourn, and Yeelirrie is referred to as a “place of death”. At the peak of WA’s uranium exploration in 2010, Traditional Owners instructed their representative body not to engage with the proponent of Yeelirrie, because there was no intention from the group to allow uranium mining at Yeelirrie.

The cultural stories and connections with Yeelirrie are a major factor in the strong and consistent opposition to this project by members of the Tjiwarl Traditional Owners.

A video interview with Traditional Owners can be viewed here. 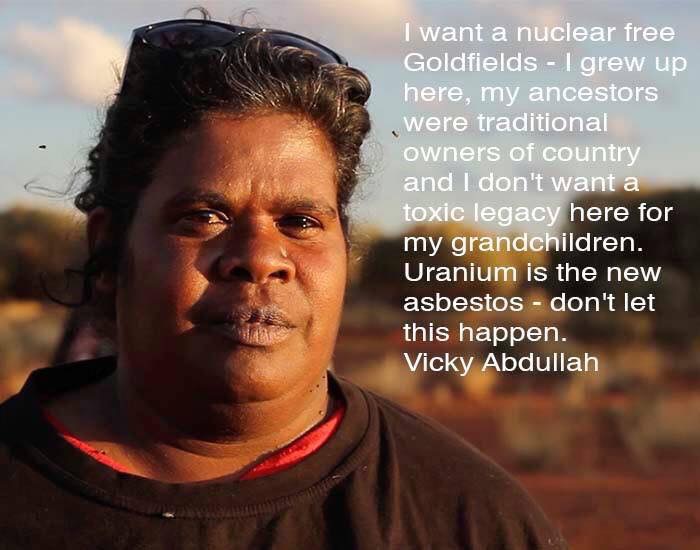 Shirley Wonyabong, Elizabeth Wonyabong, and Vicky Abdullah are the three applicants on the landmark legal case. Yeelirrie is important to each of the women, their ancestors, and their families. They have fought hard to protect this site for over 40 years, and they say they will not stop fighting for country and culture.

Since 2011, hundreds of people from across Australia and internationally have walked through the Yeelirrie area in solidarity with Traditional Owners, and to help draw attention to the importance of the area and the rights of the traditional custodians to protect sacred places. Over 3,000 people lodged submissions to the WA EPA to voice their opposition to the Yeelirrie uranium mine and in support of the Traditional Owners.

Resisting the pressure from the mining companies has been integral to the controversial environmental approval of the Yeelirrie mine.  The pressure on First Nations people to agree with mining was enormous and the three women have been standing up against it and pressures from their own community.

Their whole life has been about protecting their country and their environment and about giving others in their community the strength and support to inspire and stand up as well.

The Yeelirrie uranium project could have had Federal environmental approval and been further advanced if it weren’t for these three staunch women.  In 2016, Shirley and Elizabeth Wonyabong were honoured with WA’s most prestigious Environmental Award, the Bessie Rischbieth Conservation Award for their steadfast commitment to keep their country safe for future generations.

The David-versus-Goliath battle of these three Yeelirrie women against uranium mining has been highly recognised with legal representation confirmed for the Supreme Court of Appeals by one of Australia’s most eminent legal minds, high profile Bret Walker, SC.

The three women are showing outstanding qualities of courage, integrity, perseverance and commitment as they continue their resistance to uranium mining now in the court room. For decades they have challenged government and non-government decision makers, held public meetings and events, participated in both State and National Aboriginal led nuclear free alliances (ANFA & WANFA), been on radio and created films and continued to share their struggle with people from all over the world to create awareness about the uranium mine proposal.  They have fought every way they can.

For the past eight years, these women have been leading hundreds of people from all over the world through their country on the one month walk - Walkatjurra Walkabout in protest of the Yeelirrie uranium mine proposal.

Today they step into the court room. They are taking their message from country to the courtroom in a battle that has culminated in the highest court room of WA, the Supreme Court of Appeals. 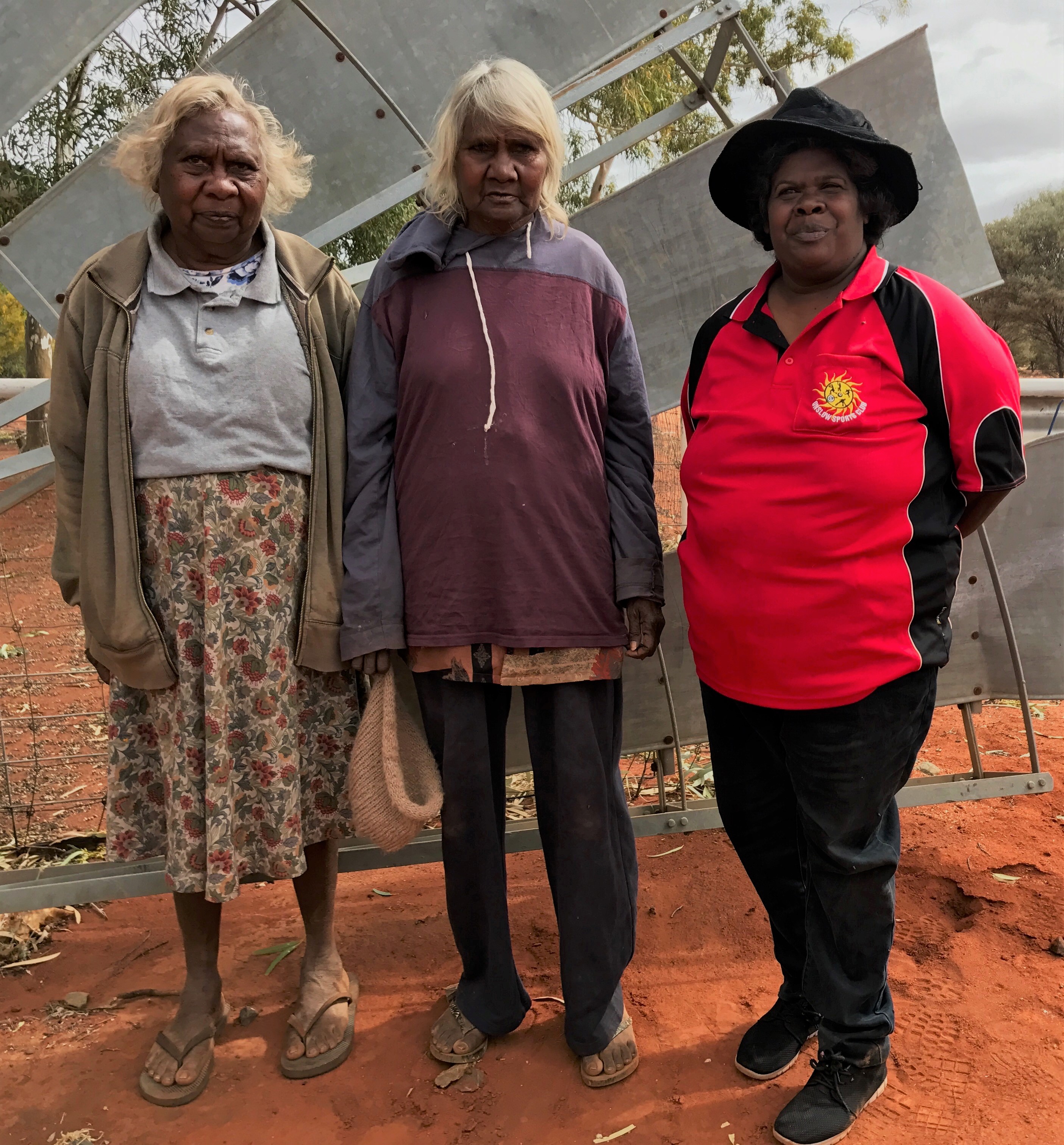 Western Australia is home to unique animals and wildlife that exist nowhere else on Earth. From the charismatic numbat and black cockatoo to the elusive underground creatures of the desert, these species all deserve protection.

But for many of our animals, survival is the exception rather than the rule. Faced with ongoing clearing, logging, burning, and destruction of habitat, scientists say that many unique species may become extinct within our lifetimes if things don’t change fast.

The decision made under the previous Government ignores important principles in WA’s environmental protection laws and sets a dangerous precedent for the environment, wildlife, and communities across the state.

The Yeelirrie approval knowingly allows extinction of multiple species and this should never be contemplated.  We must stand up for all creatures great and small.  Allowing the extinction of any creature could open the door for other species to be treated in the same way.

This case highlights the urgent need for environmental law reform in WA, to establish effective legal protection for all creatures great and small and to prevent wildlife extinction.

When governments ignore the laws that are there to protect nature and wildlife, it is up to communities to stand up and hold them to account.

As West Australia and the world learnt more about the Yeelirrie legal challenge, public interest grew and an online crowd funder raised $45,000 in less than 4 months.

The generosity of the WA public, combined with national and global funding has made this legal challenge possible. Strong public interest for the case has been shown in the raising of over $70,000 and thousands of people committed to seeing a better future for our nature and wildlife and to support Traditional Owners protecting country from an unwanted uranium mine. 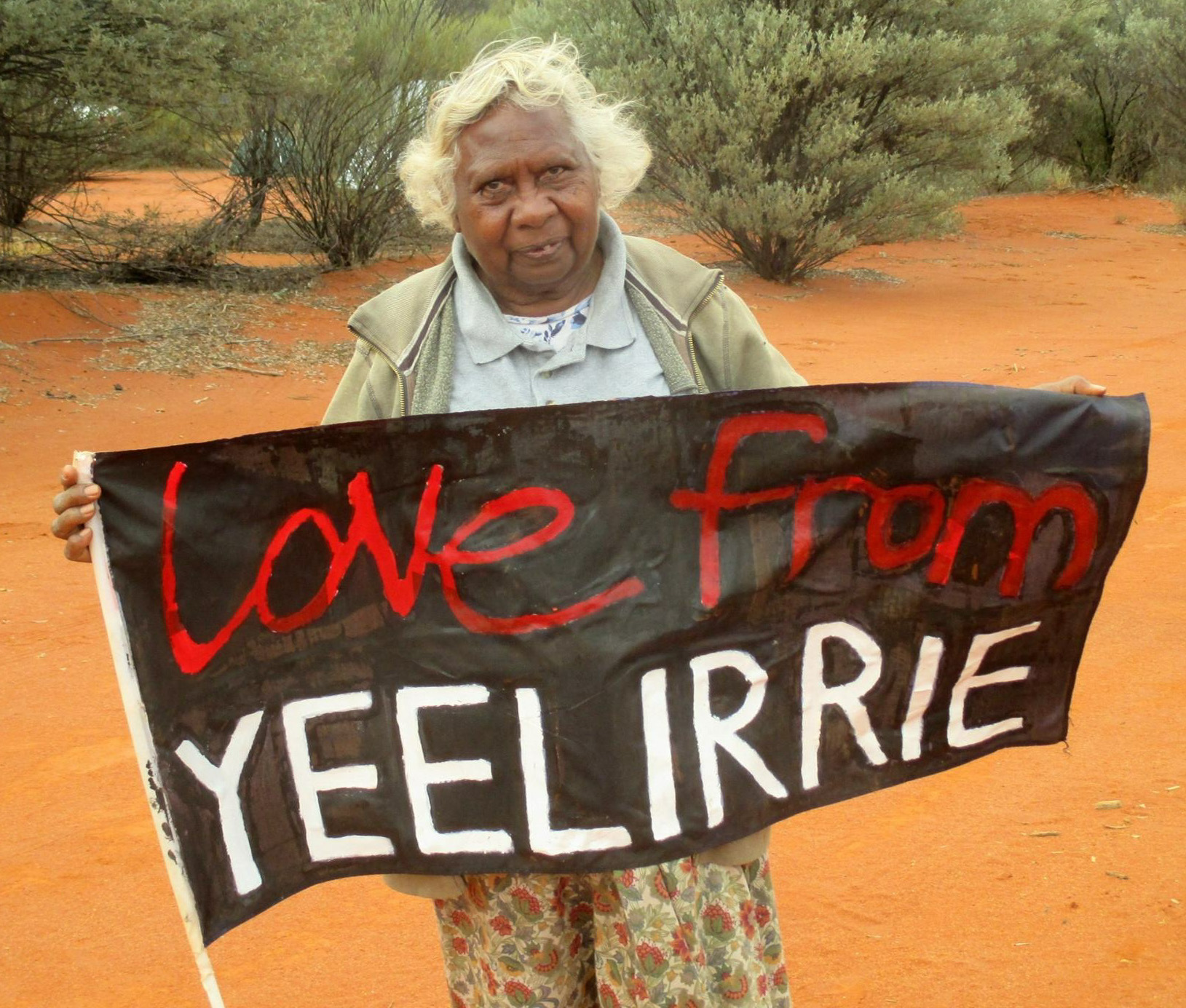