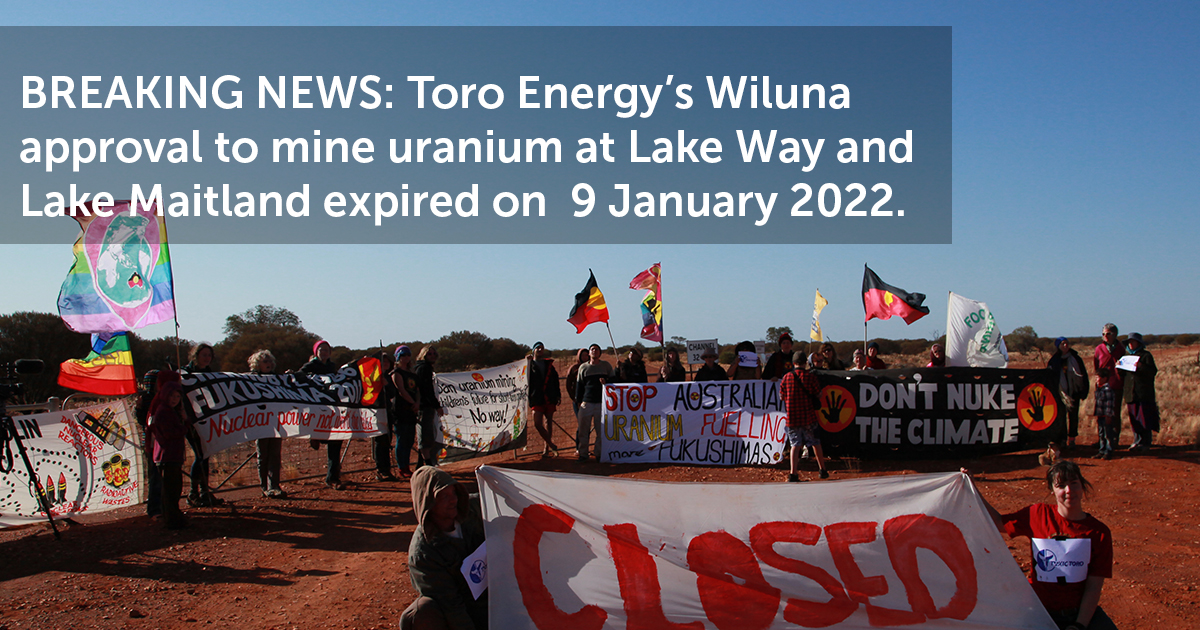 The company behind a controversial uranium mine proposal in WA’s Goldfields has failed to meet a key environmental approvals deadline, the second such development to fail in the space of two years.

The Conservation Council of WA (CCWA) - which campaigns against uranium mining in Western Australia – welcomed the news, saying that the development posed ‘an unacceptable risk’ to the environment.

Toro Energy had five years to demonstrate ‘substantial commencement’ on its Wiluna uranium mine development before environmental approvals – granted under the Barnett WA state government – expired on 9 January, this year. Wiluna is the second of four projects to expire, following Cameco’s Kintyre uranium mine which failed to meet its deadline in March 2020.

Cameco was denied an extension by the McGowan government. CCWA is now calling on the state government to deny any request to extend the window of opportunity for the Wiluna mine and ensure lasting protections against uranium mining in WA.

A third project - Cameco’s Yeelirrie uranium mine - is due to see its environmental approvals expire on 22 January.

The failure of the beleaguered proposal - which has faced stiff opposition from the local community and environmental groups alike – comes against a backdrop of sluggish global uranium prices and stagnation within the nuclear power sector which campaigners argue makes uranium mining unviable in WA.

Mia Pepper from CCWA said that uranium mining in WA is ‘unwanted, unsafe and uneconomic’.

“The Wiluna project posed an unacceptable threat on two lake systems, priority species and on a significant cultural heritage site.

“We were deeply concerned about the plan to store 50 million tonnes of radioactive mine waste on the edge of a lakebed, increased cyclonic activity and flooding in the region and an emerging pattern of non-compliance by the junior company. It is a great relief that the project cannot be pursued.”

“As was the case with the highly divisive Kintyre development, any attempts from Toro Energy to extend the approval should be rejected.”

Industry insiders have become increasingly restless given the sustained unfavourable conditions for uranium mining in Australia, with securing finance being a particular obstacle. Toro Energy’s Executive Chairman was quoted at the company’s July General Meeting in 2020 as saying ‘no-one in Australia can get finance to build a uranium mine.’

Uranium mining was one of the key issues for the Barnett Government, which promised many uranium mines, thousands of jobs and millions in royalties. However, of the four uranium projects to be granted conditional approvals, Kintyre and Wiluna are now unable to develop. Yeelirrie’s approval is set to expire on 22 of January 2022 with no evidence of development. The Mulga Rock project faces furious opposition from local communities, conservation groups and Traditional Owners and still lacks all the necessary approvals, licenses and finance to develop the project.

“The dangers associated with the mining, transportation and export of uranium are only exacerbated by poor market conditions and struggling developers which cannot properly finance their unwanted and economically unsound projects.”

Traditional Owners and national and state environment groups say today’s decision by the Department of Water and Environmental Regulation to allow a controversial uranium mine in WA’s Goldfields to proceed is unjustified...
Read More

On Friday 26 Nov 2021 over 50 supporters came out to protest against the proposed Mulga Rock uranium mine at Vimy Resources Annual General Meeting (AGM). We had a loud and vocal...
Read More

Come and join the action to help protect country and culture from the threat of uranium mining at Mulga Rock.
Read More