On Saturday 18 November, members of the community gathered at Cockburn Education Wetlands Centre for the CCWA Community Conservation Awards 2017. Hosted by our President Prof. Carmen Lawrence and Vice President Tim Barling, together we acknowledged some of the most inspiring environmentalists in Western Australia. 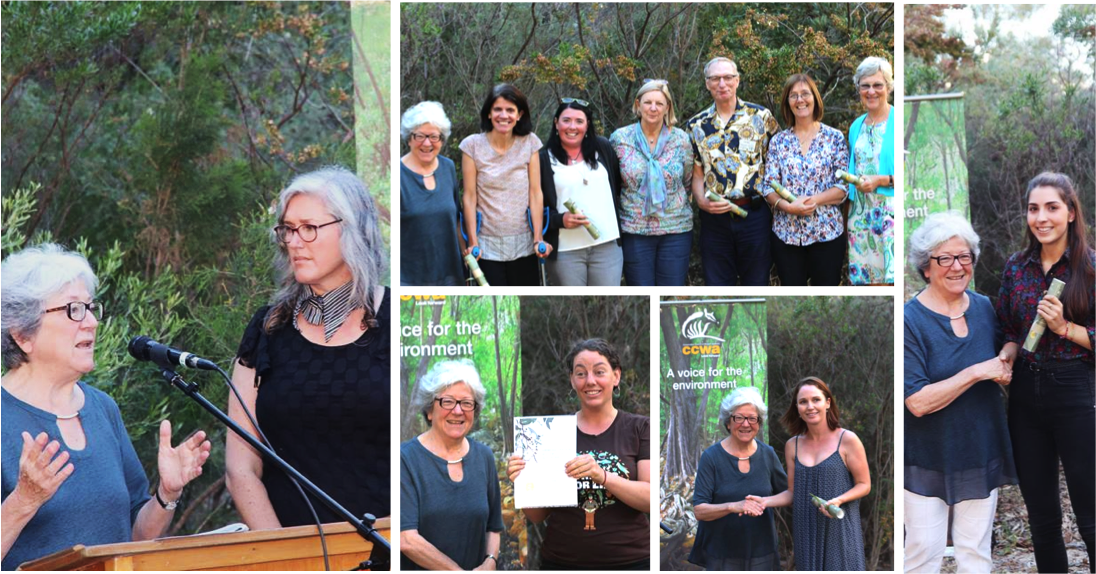 Our most prestigious award - the Bessie Rischbieth Conservation Award - was established in honour of Bessie Rischbieth, a pioneer of the conservation movement in WA. Every year we award it to an individual who has demonstrated unmatched commitment to the Western Australian environment. 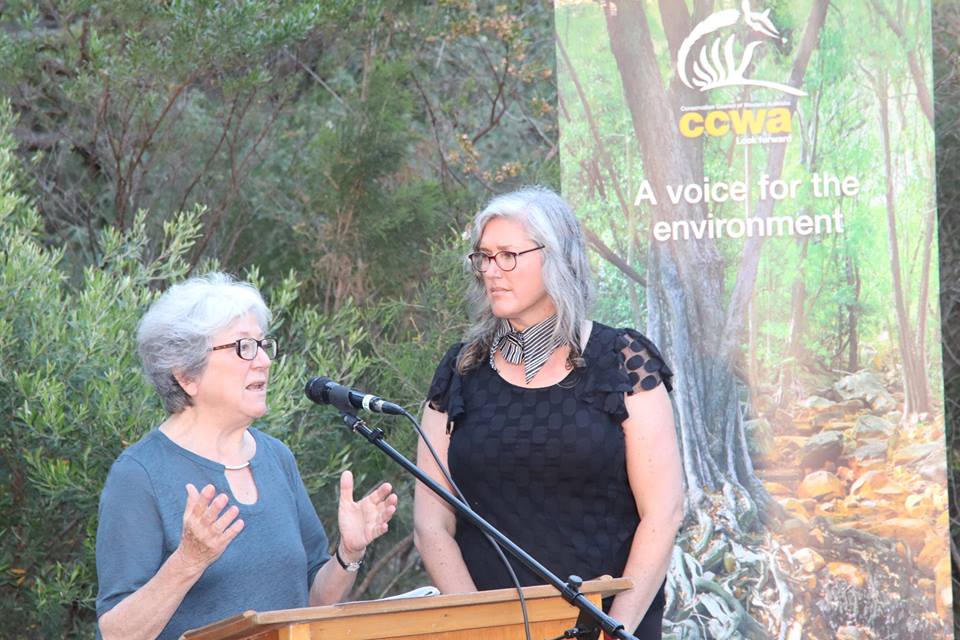 This year, we presented the Bessie Rischbieth Conservation Award to Kate Kelly.

Kate showed incredible fortitude, foresight, leadership, integrity, and determination in her role as Convener of Save Beeliar Wetlands. Kate was instrumental in several legal challenges, including the successful case against the EPA's environmental approval of the Roe 8 highway extension. Kate built an incredible community of support around her group and the campaign and inspired others to step up and take action in so many different ways over a period stretching well over a decade.

Eventually the campaign that Kate built was successful, becoming instrumental in delivering a change of government in WA and making political and environmental history in the process. Even in the most difficult times of the campaign with bulldozers destroying Kate's beloved bushland, Kate never gave up. Kate never compromised her values and never ceased to inspire others to take action.

For Kate, the loss of the Beeliar Wetlands were simply not an option. Kate's legacy in environmental policy and law, and in the protection of the Beeliar Wetlands will be permanent and inspiring for generations of environmental activists and communities in the future. Kate's humble approach, her good humor, and her phenomenal self-taught ability in political, legal, media and community organising strategy  make her a standout nominee for this award. 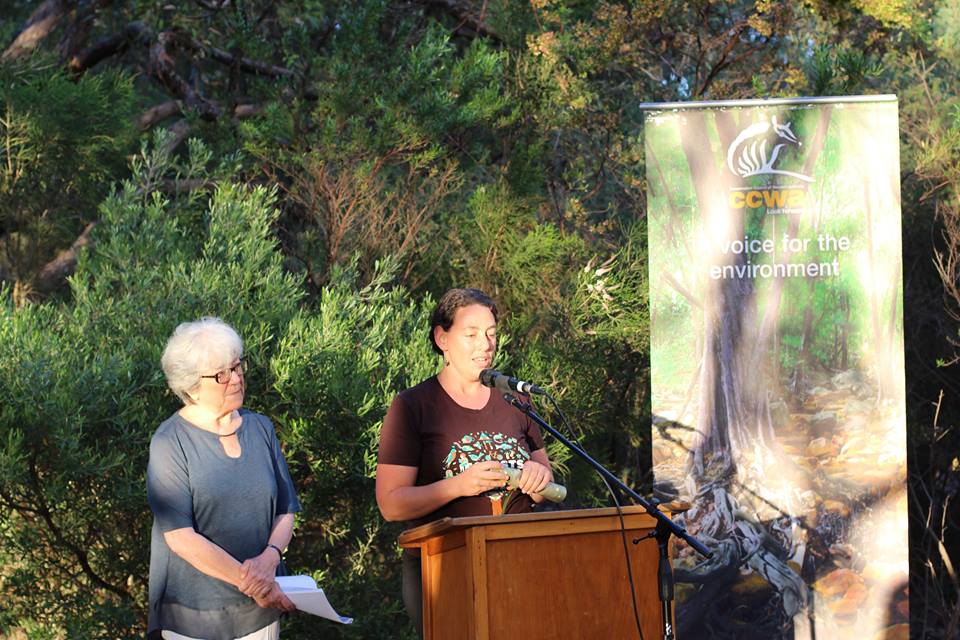 The Len Howard Community Group Award was established in honour of Len Howard, who founded and led for 20 years one of WA’s most successful conservation groups, the Peel Preservation Group. The recipient of this award is a community group which has demonstrated an outstanding commitment and success in the conservation of the Western Australian environment.

This year we granted the Len Howard Community Group Award to Barrabup Conservation Group, which was accepted by Shona Hunter.

Barrabup Conservation Group has demonstrated outstanding commitment and courage in advocating the protection of the High Conservation Value Barrabup forest from logging. The group has worked tirelessly, voluntarily, and remotely, to draw an impressive degree of attention to the issues.

The two leading members, Ellie and Marty McKie, have demonstrated excellent capacity in research and communication, using available regulations and policies, building support in the South West and the city, engaging media, and maintaining public pressure to protect nearly 60 hectares of forest. 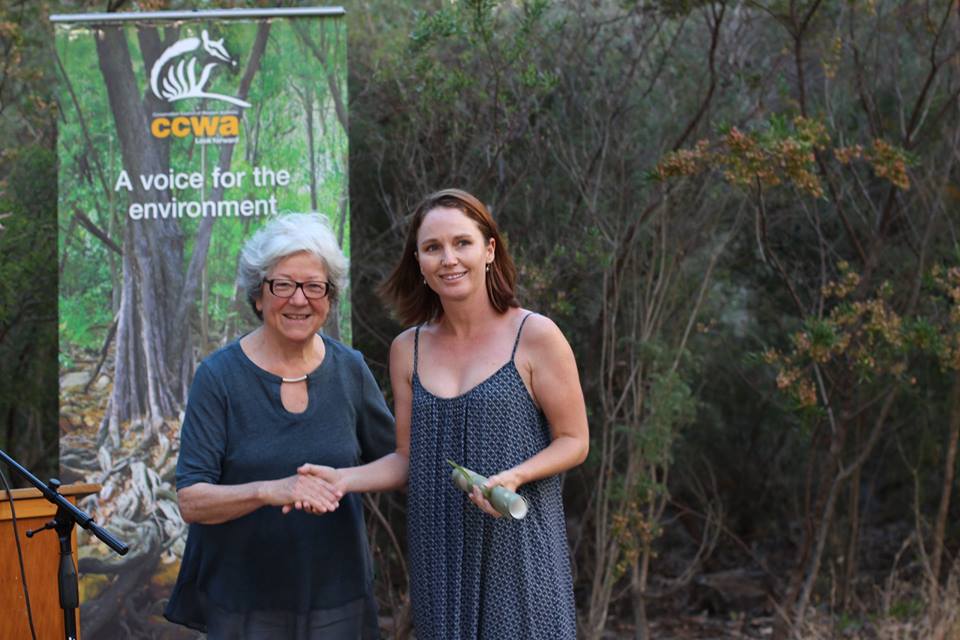 The John Oldham Conservation Employee Award was established in honour of John Oldham, the Foundation President of the Conservation Council of WA from 1967 to 1970, and a long term delegate to the Council. It’s awarded annually to an individual employed in the conservation sector who has demonstrated tremendous commitment to our environment.

This year we granted the John Oldham Conservation Employee Award to Thelma Crook. Unfortunately, Thelma couldn’t be with us on the night, so accepting on her behalf was her daughter, Jo Harvey.

Thelma has been a passionate advocate of Landcare in the Peel-Harvey region for almost three decades. She worked as a natural resource officer with the Department of Water and Greening Australia, and has volunteered for the past five years to co-ordinate the annual Shorebird 2020 counts when funding to support these ceased.

In 2010, Thelma received a fellowship under an Alcoa Australia's sponsored Earthwatch program to work overseas and spent two weeks in the Jizera Mountains in the Czech Republic studying the impacts of acid rain on vegetation and waterways. 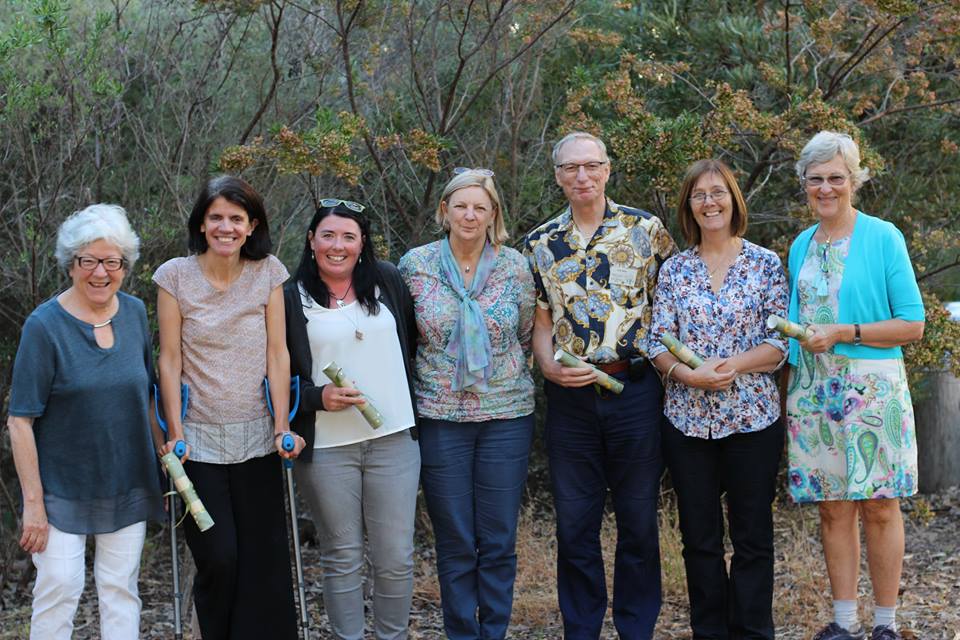 Those named to Conservation Council of WA Honours List this year have demonstrated a long term commitment to the Western Australian environment.

The recipients have been actively involved in the conservation movement for many years, have made a constant and invaluable contribution to their groups, have contributed to vital networking and cooperation between conservation groups, and have displayed qualities of integrity, reliability, and commitment.

This year we named the following people to the Conservation Council of WA Honours List: 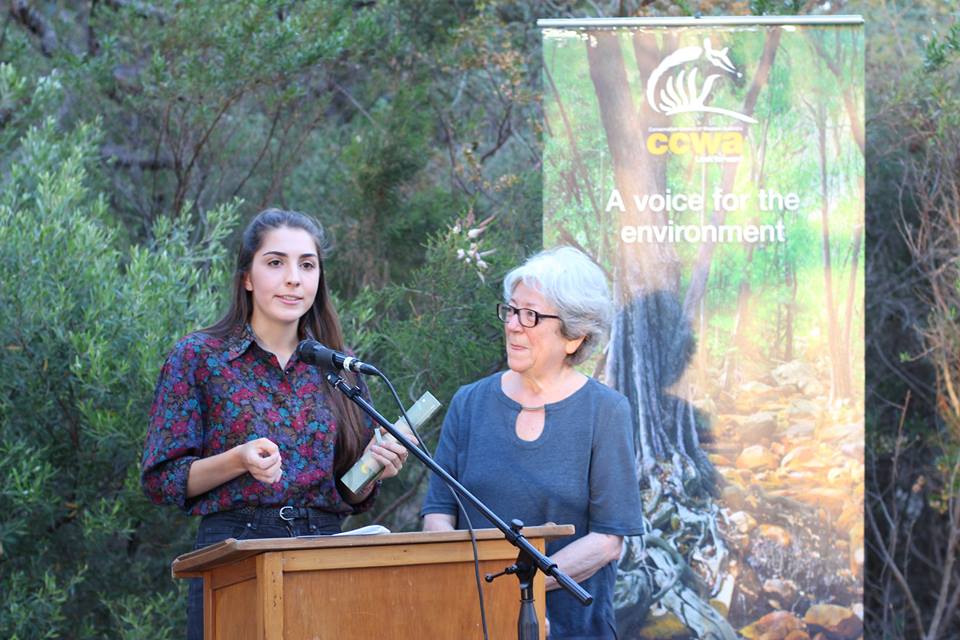 With the Young Environmentalist Award, CCWA acknowledges an individual aged thirty years or under who has demonstrated an outstanding commitment to the WA’s environment, and who has played a leadership role in advocacy or campaigning to achieve greater environmental protection.

We were pleased to announce that this year’s Young Environmentalist Award went to Correa Driscoll, for putting consistent energy and effort into organising and campaigning within the climate movement across groups. Correa is a very impressive person.

This year also marked the creation of a new award, the Non-Violent Direct Action Award, which we presented to more than 200 protectors whose outstanding commitment and dedication protected the Beeliar Wetlands in the summer of 2016 to 2017. Receiving this award on behalf of the protectors was Shona Hunter.

And thank you to you - everyone in our CCWA Community - for another inspiring year! Together, we will continue to protect WA’s wildlife and environment for present and future generations to enjoy. See you next year!