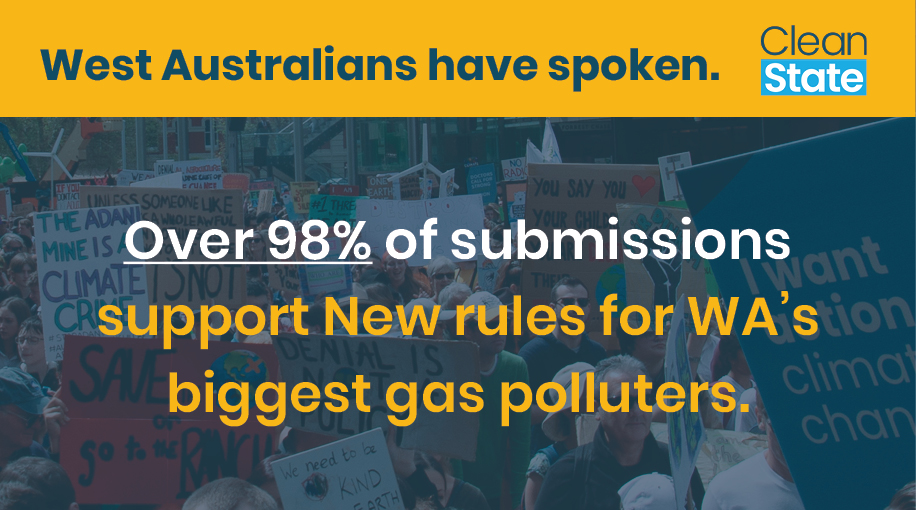 Consultation on the Environmental Protection Authority's (EPA) paused carbon pollution policy has revealed overwhelming support for the policy to be reinstated and strengthened, according to submissions published on the EPA website yesterday.

The EPA policy, released earlier this year proposed new rules requiring WA’s biggest polluters offset emissions through projects such as tree planting, carbon farming and renewable energy. A campaign by WA’s biggest polluters in the LNG industry spearheaded by Woodside and the West Australian led to the EPA withdrawing the guideline subject to further consultation.

Submissions received by the EPA have now been published online and reveal overwhelming support from the community, scientists, business and the general public for the policy to be reinstated and strengthened. 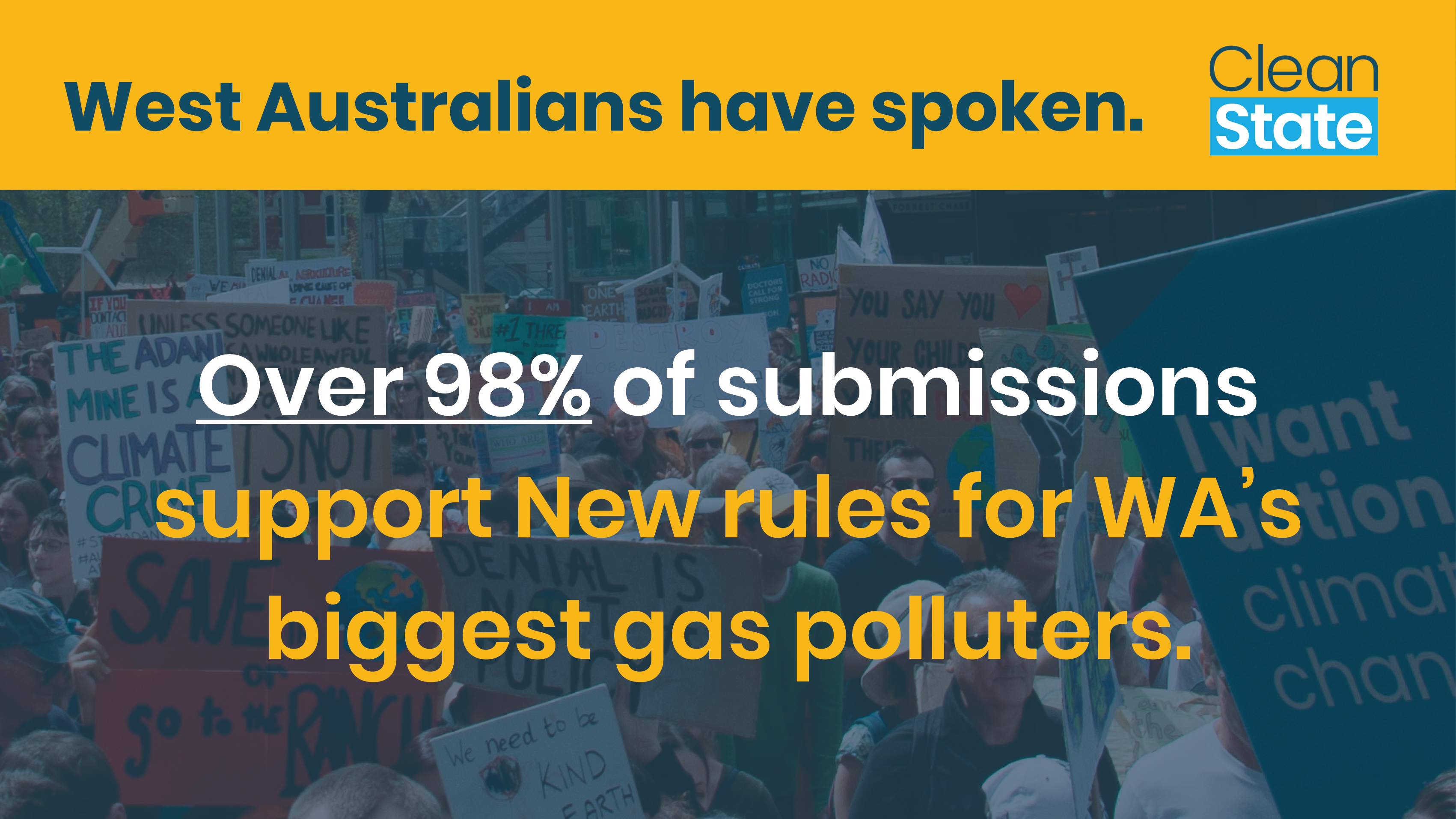 Almost 7,000 submissions were received, many from expert scientists, industry groups and other organisations concerned about the impacts of climate change and the rapidly rising and uncontrolled pollution from WA’s LNG industry.

Conservation Council of WA (CCWA) Director Piers Verstegen said the submissions process had revealed that the campaign by WA’s biggest polluters did not have the backing of the community, who were overwhelmingly supportive of the EPA’s proposed guideline.

“Very few submissions received by the EPA support the self-serving efforts of WA’s big polluters to block action on climate change and avoid their responsibility to clean up their act.

“Predictably, WA’s biggest polluters in the LNG industry have argued that other sectors of the community and business should bear the cost of their rapidly rising pollution, but the consultation shows that Western Australians are not having a bar of it.

“Action to offset carbon pollution from WA’s biggest polluters as proposed by the EPA would cost a fraction of their record profits yet would deliver over 4,000 new jobs for Western Australians in industries such as tree planting, carbon farming, renewable energy and clean technology.

“Many submissions received by the EPA from business leaders, scientists, experts and community groups called for even stronger action, including the refusal of any new fossil fuel projects on the grounds that such developments pose an unacceptable threat to the climate and the WA environment.

“Clearly there is overwhelming support across the community for sensible action on climate change as proposed by the EPA, which would unlock thousands of new jobs in clean sustainable industries of the future.

“When it comes to policy on climate change and carbon pollution, we call on the EPA to listen to the thousands of community submissions and input from experts, scientists and community groups supporting action on climate change – not the blockers and rent-seekers in WA’s most polluting industries.”

"In line with the science, we believe the new EPA Guidelines on greenhouse gas emissions assessment should include: The requirement of net-zero emissions for all new projects, from commencement. The prevention of new or expanded fossil fuel production. Our view is based on the scientifically robust carbon budget framework. On this basis, most existing fossil fuel reserves must remain unburned. Any new fossil fuel development is incompatible with the goal of the 2015 Paris Climate Agreement."

"The EPA Guidelines are appropriate. However, they are too conservative compared with measures which are now required to avoid potentially catastrophic damage to the WA environment. No approval should be given to any new fossil fuel project, whether coal, oil, gas, using conventional (LNG) or unconventional (fracking), for domestic or export consumption, unless it has proven, safe and secure mechanisms in place from the outset for the long-term sequestration of all carbon emissions produced by that project, encompassing Scope 1, 2 and 3 emissions.”

"In WA, the gas industry is already a major contributor to GHG emissions and is key point of concern for the UCWA. "This is a very concerning level of climate impact that we have a moral obligation to mitigate and preferably avoid, and the UCWA urges the EPA to ensure that all fossil fuel projects in WA are addressed under its guidelines."

"WA LNG projects are pushing up Australia’s emissions. The EPA recommended offsets to stop emissions rising. Contrary to industry claims, FOI documents show the EPA consulted with industry who opposed offsets. Gas companies can afford to buy offsets at very small shares of their profits. They already use internal carbon prices, which they should disclose. A large expansion in gas exports is not consistent with solving climate change. If approved, new projects should offset exported emissions or ensure exported gas is burned under climate policies consistent with Paris Agreement goals."

"People already experiencing poverty and hardship have the fewest protections from climate change impacts and live in the most affected places. The electricity sector has clear access to affordable and deployable low/zero-emissions technology, particularly in the forms of wind and solar. Where offsets are necessary, their delivery within Western Australia should be prioritised.

"Without sufficiently robust guidelines in place, [the polluter pays principle] is less likely to be met and instead places a greater burden on the community to take the necessary action and investment to address climate change, which inevitably sees those who have contributed the least to climate change having to contribute more than they would otherwise on prevention and mitigation. This has serious equity concerns, while also potentially placing greater financial pressure on those already experiencing poverty and hardship."

"Climate change is a key issue for Local Governments that cuts across almost all aspects of operations and responsibilities. WALGA supports the EPA’s proposed guidelines and the EPA’s consideration of the current level of policy commitment at the State and Federal level in formulating the guidelines."

"The use of electricity sector offsets (such as LGCs) can ensure adequate supply of “low cost” offsets for state policy and minimise compliance costs. In minimising reliance on international offsets, policy can maximise local investment and related co-benefits.

"While Australia has a large theoretical availability of offsets, this supply is conditional on the development of a robust source of demand to purchase offsets and unlock new project development in the land sectors."

"Requiring existing LNG projects to reduce and offset emissions is an essential first step in controlling WA’s emissions growth and delivering new jobs in clean industries. LNG developments must be required to offset all pollution. Gas is a fossil fuel that contributes to climate change. Recent reports have identified that the threat to the climate from LNG expansion is as great, or greater than coal. The International Panel on Climate Change (IPCC) has called for a near-term reduction in natural gas production of 15% by 2030 and 43% by 2050 in order to meet the temperature goals established under the Paris Agreement."

"To make substantial improvements to our already low emission reduction commitments, efforts must be taken to limit the development of the LNG industry and reduce and offset pollution from existing facilities. Climate science should be the EPA's central and most significant consideration in the greenhouse Gas Guidelines. "the Earth does not have the capacity to absorb any more fossil fuel burning power stations and keep global heating to within tolerable limits. The EPA must, therefore, advise against the development of additional or expanded fossil fuel production sources. The EPA guidelines should require all projects to achieve net-zero emissions via avoiding, reducing and offsetting pollution.”

"The science shows that no new or expanded project that doesn’t fully offset all emissions should be approved. Industry is increasingly including a cost of carbon in investment decisions, and these Guidelines will provide certainty. The planetary carbon budget required to remain below 1.5ºC or 2ºC of warming is being compromised by LNG extraction. WA’s carbon budget is also being compromised by LNG extraction. Fugitive emissions from natural gas extraction make methane equivalent to coal in terms of GHG pollution. An argument about LNG as a transition fuel for ‘baseload’ electricity is not supportable. Renewables, properly regulated, are cheaper, more reliable and better for the environment. There is no scope (globally or locally) to develop new natural gas projects while attempting to reach the Paris COP21 warming targets."

"We believe that growing new trees and sustainable forestry activities would yield significant carbon storage, social and environmental benefits in WA and these benefits should be recognised by policymakers (including the EPA) in policy and regulatory reform."

"The state government needs to prioritise a carbon reduction plan. That we do not have one that sets targets for GHG emissions is unthinkable in 2019."

"The ECA supports the consideration of Scope 3 emissions in the assessment as this enables transparency regarding the likely life of project effect on global carbon production."

Natural Resources Management Western Australia
"Climate change has emerged as the overarching and most urgent threatening process in our regional areas. NRMWA supports the EPA’s continued mitigation hierarchy where an assessment of a proposal seeks firstly to avoid and reduce impacts and as a last resort seeks environmental offsets if significant residual impacts remain."

"Carbon farming and sequestration in these pastoral areas could have immense benefits to the environment."

Doctors for the Environment Australia

"A moratorium or ban on new or expansion projects, and replacing these with renewable energy generation, storage and transport innovations, would be consistent with the first and most effective principle of the “mitigation hierarchy” of first avoiding emissions."

"The State Government's new policy statement ... means that no further growth in emissions should be acceptable."

"The first step to implementing a carbon budget in WA is to cap our GHGe; i.e. to stop the increase in GHGe.

"The trend of the relative costs of power generation in China show that renewables (solar PV and onshore wind) are already cheaper than natural gas and will be cheaper than coal by 2026."