Environment groups have renewed calls for an urgent transition of the South West forest industry, as set out by the Forests For Life plan to protect wildlife habitat and timber industry jobs, and to prevent the further destruction of ancient forests for low value woodchips and firewood. 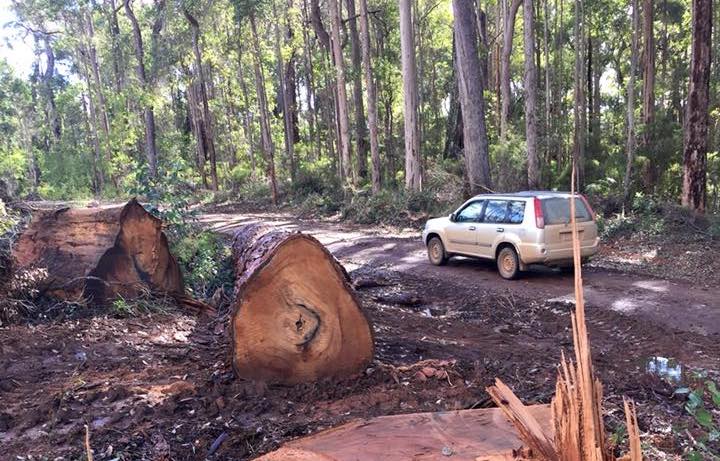 The call comes in response to the release of a draft review of the Forest Management Plan that was introduced by the Barnett Government. The draft review has been released for community consultation by the Conservation Commission.

Logging of ancient forests for woodchips and firewood ‘unsustainable’.

Conservation Council of WA (CCWA) Director Piers Verstegen said that the draft Mid Term Review revealed an unsustainable industry in chaos, and was an attempt by government agencies to cover up ongoing impacts on endangered species through continued clear-felling of ancient forests for firewood and woodchips.

“Thousands of community submissions and many scientists and experts warned the Barnett Government that its forest logging policy would be economically unsustainable and environmentally disastrous, and that is exactly what has been revealed by this review.”

The West Australian newspaper has reported that the South West native forest logging industry is ‘hanging by a thread’ due a lack of economically viable saw logs and low demand for its products.

“Past over-cutting, and low growth rates due to climate change are forcing the logging industry into the few remaining High Conservation Value forest areas with big old trees. These are the same areas that provide critical habitat for endangered species, and must be protected to prevent their extinction,” said Mr Verstegen.

“Despite clear warnings, the Barnett Government’s Forest Management Plan failed to plan for this inevitable situation by avoiding the transition to sustainable plantation-based forest industry in the South West. Such a transition is now even more urgently required.”

“Rather than a genuine science-based reappraisal of the leftover Barnett Government era forest management policies, this review represents the McGowan Government rubber stamping increased logging at the expense of forests, wildlife, biodiversity, and communities,” she said.

“This review has a critically important function. It is supposed to check whether targets are being met, and whether forests, wildlife, and biodiversity are being conserved.

“Instead, the review has ignored cries from within the Department of Biodiversity and Conservation’s own ranks for High Conservation Value forests to be assessed and protected.

Ms Beckerling said the review’s description of threatened wildlife - including Forest Black Cockatoos and the critically endangered Western Ringtail Possum - losing their habitat as being ‘temporarily displaced’ was absurd bureaucrat-speak, and flew in the face of the science.

“The science and WAFA’s community forest surveys show without a shadow of doubt that threatened wildlife are losing critical habitat during logging operations. You can’t clear fell and burn an ancient karri forest known to be home to threatened wildlife, and not destroy their habitat,” she said.

“This is not ‘temporarily displacing’ threatened species. It’s pushing them past the point of recovery.

“We have to act now. Forests and endangered wildlife can’t wait another five years for things to change.

"WAFA's Forests For Life plan would see more than 800 people employed in a sustainable farm forestry sector, and would see forests protected for wildlife, climate, and people,” said Ms Beckerling.