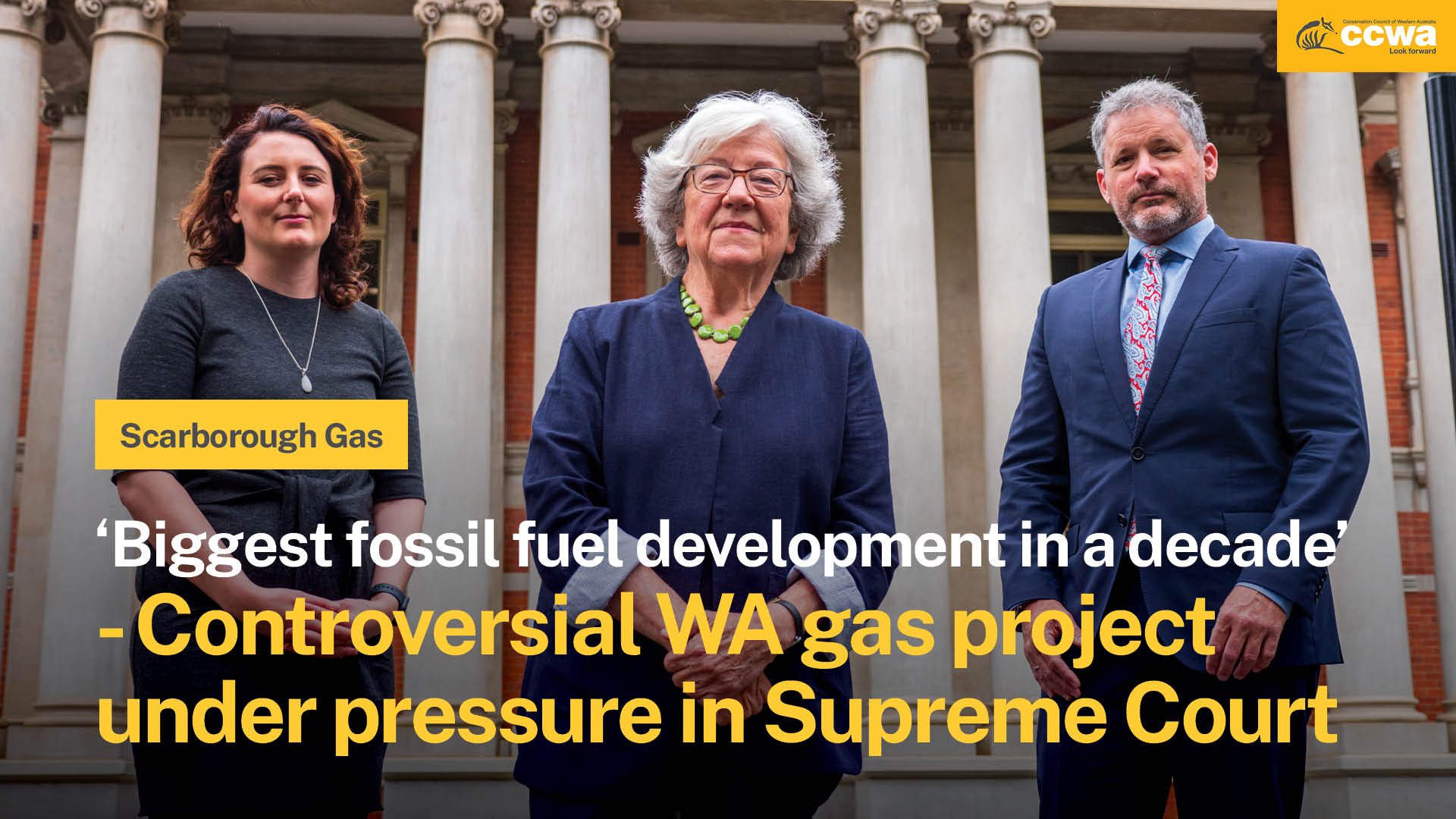 The fight against Woodside’s controversial Scarborough gas development is heading to the Supreme Court with proceedings set to begin this morning (Monday 20 December 2021).

CCWA will argue that the EPA permitted those approvals to be changed, allowing for the processing of significant amounts of additional fossil gas – at Woodside’s request – without undertaking a further assessment of the environmental impacts of those changes. The Council will assert that these changes were in contravention of the Environmental Protection Act.

The Council has stressed that unless the impacts from processing additional amounts and additional sources of gas are reassessed, there will be no way that the amount of pollution produced or the impact on the environment can be properly understood or measured.

Campaigners have estimated that the Scarborough development will produce an additional 1.6 billion tonnes of carbon emissions for the next 25 years – the equivalent of 20,000 flights around the world, every day, for a quarter of a century.

Maggie Wood, Executive Director of CCWA, said: “This is the biggest fossil fuel development proposed in Australia for a decade at a time when our country should be rapidly decarbonising.

“We believe that all developers – but particularly developers of highly contentious fossil fuel projects – should be held to the same consistently high standards and measures. It is for this reason that CCWA has pursued this matter in the Supreme Court of Western Australia.

“Unless these environmental approvals are questioned and challenged, Woodside could have free rein to produce staggering amounts of pollution, far in excess of that which they initially proposed.

“We are taking this action on behalf of the thousands of Australians, right across the country, that want to see highly polluting fossil fuel developments properly scrutinised and assessed according to the highest standards of our environmental laws.”

The controversial Scarborough gas development is planned for WA’s Burrup Peninsula – known as Murujuga by Traditional Owners. The area is known globally for its rich cultural heritage and the many thousands of ancient rock carvings, currently shortlisted for UNESCO World Heritage listing.

Pollution from heavy industry on the Burrup has been linked to the formation of acids on the surface of the rocks, which degrade and destroy the engravings over time. Scientists fear that unless emissions on the Burrup Peninsula are kept in check, the world’s biggest collection of rock art could be gone ‘within 100 years’.

Tim Macknay, Managing Lawyer at the EDO, said: “Australians deserve clarity and transparency for the developments that their governments approve.

“Approvals and subsequent changes to those approvals should not simply be rubber stamped – especially where those decisions could have a massive impact on the lives of everyday Australians in the not-too distant future.

“Our client (CCWA) will argue that the Minister’s delegate failed to apply the correct test when deciding whether these changes might have environmental effects which required further assessment.

“In short, this case is simply about ensuring that projects are properly assessed for their environmental impacts and that government ministers and statutory bodies follow correct process.”

The case, which is before his Honour Justice Jeremy Allanson, is scheduled for the 20, 21 and 22 of December. A decision is expected next year.

Can you chip in to help fund our legal challenge? We will continue to hold big polluters like Woodside to account because we cannot give up on our climate.

The Conservation Council of WA (CCWA) has said it intends to appeal a recommendation by WA’s Environmental Protection Authority that Woodside’s proposed extension of the North West Shelf gas processing facility...
Read More

The Conservation Council of WA (CCWA) has welcomed an announcement by the WA State Government that will see emissions from all government agencies cut by 80 per cent below 2020 levels,...
Read More