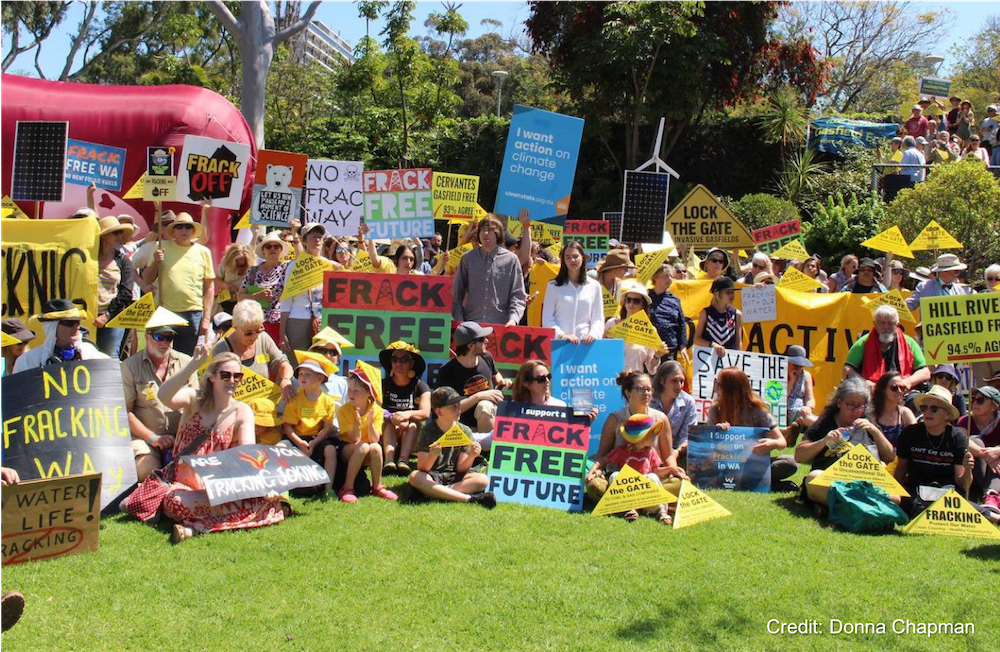 Thousands of people asked their local MPs and the Premier to support a permanent statewide ban on fracking, and together we also launched our new Clean State campaign to address LNG pollution.

We’ve also been preparing for our CCWA AGM, Conference & Awards 2018, and we’re really looking forward to this year’s line up of speakers, stall holders, and entertainers! Our tickets are now sold out, but we still have some volunteer spots available.

Finally, we had some great news on the Nuclear Free WA campaign. Keep reading for this and more of your highlights from October!

A message from Piers about the McGowan Government’s upcoming decision on fracking:

“In October, hundreds of us gathered at Parliament to call on our MPs to support a permanent, statewide ban on fracking. It was all over the news!

Momentum is building because the WA Fracking Inquiry has handed in its homework, and our MPs are considering the future of fracking in our state. In the next few days or weeks, a decision could be made to lift the ban on gas fracking in the Kimberley, Mid West, and other parts of WA.

The Fracking Inquiry received thousands of submissions, and thousands of pages of scientific evidence supporting a statewide fracking ban. But we also know the gas industry has been lobbying Government to allow vast areas of the Mid West and Kimberley to be turned into industrial gasfields.

This is a major decision for the McGowan Government which will shape the legacy of Premier Mark McGowan and WA Labor. With a decision imminent, it’s crucial that your MP hears from voters like you on this issue. Please email your MP now and ask them to support a permanent ban on fracking. If you've already done this, will you ask your friends to do the same? Thank you!”

A message from Sarah about our CCWA Conference & Awards 2018:

“Our speakers are polishing their presentations, our jazz players are tuning their instruments, and our chef is curating a delicious menu just for you. That’s because in a fortnight, we’re hosting our CCWA Conference & Awards 2018: Biophilia!

Inspired by biologist Edward Wilson’s biophilia hypothesis, which proposes that nature is essential for human beings’ emotional wellbeing, our passionate speakers will inspire you to explore what motivates you to protect wildlife and nature, and to share your most authentic and powerful stories with others.

We’re now officially sold out, and look forward to welcoming nearly 200 delegates at 12pm on Saturday 17 November at Perth Waldorf School in Bibra Lake, for an incredible day of reflection and storytelling.

If you missed out, we still have a few volunteer spots available. Please email [email protected] if you’re interested and available in the morning!”

A message from Kate about Clean State:

"In October we heard the stark warning from the world's top climate scientists - we must get pollution from fossil fuels like coal and gas under control.

But did you know that WA’s biggest polluters in the gas mining and export industry are already polluting as much as five large coal-fired power stations, every year, right here in WA? And that’s just from gas processing - much more pollution is released when the gas is shipped and burned overseas.

This growing gas pollution is rapidly heating our planet and preventing our country from meeting international obligations on climate change.

But the good news is we can get this pollution under control, and give WA’s emerging clean economy a huge boost at the same time. By investing some of the gas industry’s record profits into renewable energy, carbon farming, tree planting, and clean technology, we can create hundreds of new jobs while delivering less gas pollution and more clean solutions for WA.

If you’re among the majority of Western Australians who want action on climate change, you can sign the Clean State petition and check out our website to learn more!"

A message from Kerrie-Ann about Nuclear Free WA:

“Earlier this year, many of you contacted Federal Environment Minister Josh Frydenberg, asking him not to approve the Yeelirrie uranium project until after our legal challenge with Traditional Owners was heard in the WA courts. This month, we welcomed the confirmation from new Federal Environment Minister Melissa Price that she will defer any decision on the project until after the case has been concluded.

This development confirms the importance of our court challenge in ensuring that this uranium project, and the wildlife extinction it would cause, cannot proceed. With the hearing date in the Court of Appeals likely to be postponed until next year, Yeelirrie is safe for at least a few more months yet.

Together, we're making a real difference - thank you! You can continue to support this historic court case here.”

The Conservation Council of WA is an independent, not-for-profit organisation - we are apolitical and are supported by voluntary donations. If you would like to contribute to help fund CCWA's work, please donate now! You can unsubscribe or update your email preferences at any time. You are receiving this email because you took action online or at an event.

Our team acknowledges that we meet and work on the land of the Nyoongar people. We pay respect to their Elders - past, present, and future - and acknowledge the important role all Aboriginal and Torres Strait Islander people continue to play in advancing a more sustainable Western Australia.

This month has been full of action! From climate change to wildlife protection laws, local campaigns, and even an epic walk through the desert, our community has been as busy as ever...
Read More