Western Australia’s peak environment group has renewed its call for the McGowan Government, industry, and community to step up efforts towards the protection of native wildlife and endangered species following the release of the Auditor General’s report today. 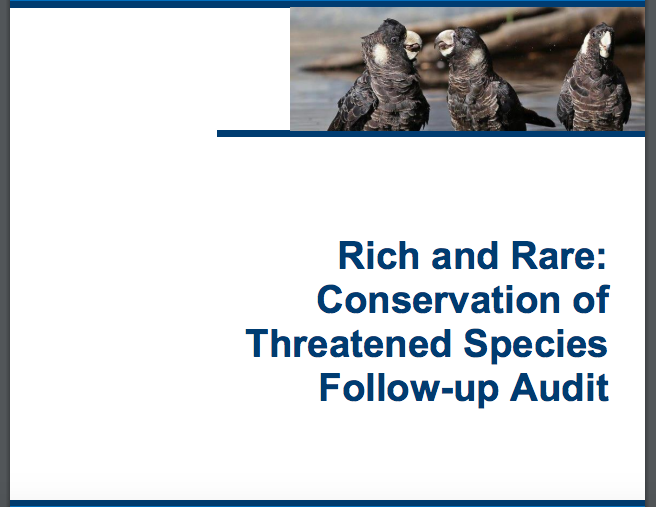 Key findings in the Auditor’s Rich and Rare: Conservation of Threatened Species Follow Up Audit show that while there have been some recent improvements, there is a lot more work to do to protect WA’s unique wildlife and biodiversity.

The report identifies a significant increase in the number of threatened species since the last audit in 2009, and reveals that many of the recovery plans for these species remain unfunded, and are not activated ‘because funding for action does not automatically or systematically follow when they are created’. Other concerns raised in the report include the lack of effective monitoring and reporting on the state of biodiversity.

CCWA Director Piers Verstegen said the latest Auditor’s report is a wake-up call for the government, industry, and community that more needs to be done to protect our unique wildlife and biodiversity.

“We live in a global biodiversity hotspot – so named because of the incredible diversity of unique species – but also because of the serious threats to the survival of these species.

“This is an important reminder from the Auditor General on the eve of the state budget, showing that there is a lot more work to do to protect our unique wildlife.

“The public release of the Biodiversity Audit II, which was suppressed under the previous government, is one important step towards improving publicly available reporting and monitoring information in line with the Auditor’s recommendations. Releasing this data is critical to building awareness and support in the community for wildlife protection, and we understand that the DBPA is currently considering how the information can be released.

“The lack of funding for recovery efforts for threatened species is also a serious concern, and on the eve of the state budget this is a timely reminder that adequate resources must be committed to wildlife protection.

“While funding is critical, many actions can be taken at no cost to Government.

“We know that the greatest threat to wildlife here in WA is loss of habitat through logging, clearing, burning, and the effects of climate change.

“Under the Barnett Government, native vegetation clearing regulations were weakened and increases to logging of native forest were approved.

“We are hopeful that the new McGowan Government will move to address these issues, including through protecting High Conservation Value forests, and transitioning the WA timber industry to sustainable farm forestry in line with commitments made by WA Labor before the election.

“The next decade will be critical to the survival of many unique species – both iconic animals such as the Carnaby’s Cockatoo and the Numbat, as well as lesser known but equally important wildlife that exists nowhere else on Earth.

“Now is our chance to secure a future for our wildlife but we must take action now.”