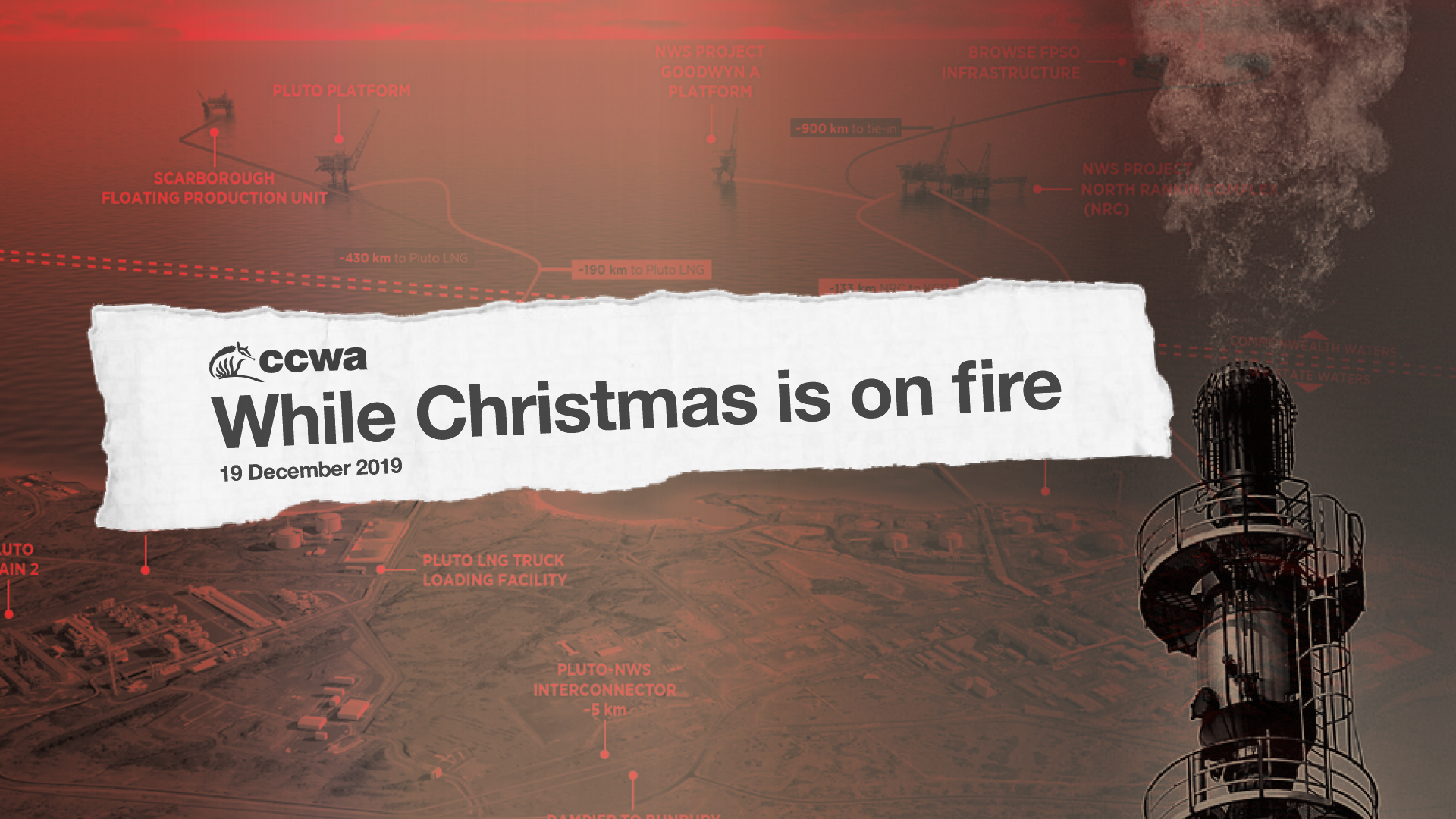 While Christmas is on fire, Woodside consults on Australia’s most polluting fossil fuel project

Environment groups have condemned a decision by Woodside and the WA Environmental Protection Authority (EPA) to undertake community consultation on the giant Browse Basin and North West Shelf LNG project over Christmas, while communities are battling to save homes from bushfires made more severe by climate change.

Thousands of pages of documents and technical information connected with three significant parts of the Burrup Hub LNG project were released by the EPA for public comment yesterday.

Conservation Council of WA (CCWA) Director Piers Verstegen said the documents confirmed that the Browse Basin proposal was by far Australia’s biggest and most climate-damaging fossil fuel project and that the company was trying to avoid public scrutiny by conducting a consultation over the Christmas break.

"The documents released reveal the combined impact of the projects on the climate will be more than previously estimated, and several times greater than the proposed Adani coal mine in Queensland.

“This is totally inconsistent with the public and shareholder commitments that have been made by joint venture partners such as Shell and BP, both of which have committed to reducing the carbon intensity of their global energy portfolios.

“Woodside has recently made a public commitment to net zero emissions by 2050, yet there is no evidence at all in these documents to suggest that will ever be achieved.

“The documents suggest that Woodside’s goal is a hollow commitment designed to lull shareholders and investors into a false sense that the company is responsibly dealing with its carbon risk.

Little effort to demonstrate emissions reduction
“Despite the incredibly high levels of pollution that these projects would cause, Woodside has gone to great lengths to avoid committing to any meaningful action to reduce the pollution from this mega project.

“These are existing technologies that can reduce emissions and create jobs. Ignoring these opportunities is directly contrary to the EPA’s draft climate policy and displays an astonishing level of arrogance by Woodside.

No evidence to support ‘clean gas’ myth
“This was Woodside’s opportunity to present evidence to support its claim that gas is replacing coal and reducing global emissions - yet the company has not bothered to give any such evidence, and the documents admit that the “likelihood of this outcome is considered uncertain”.

“While woodside rely on vague references to outdated documents, recent analysis (reported here) shows that LNG has taken over from coal is the primary driver of global pollution increases

“Woodside’s argument about fuel displacement has no basis and should be dismissed unless Woodside can demonstrate verified carbon credits or other proof of their unlikely claims.