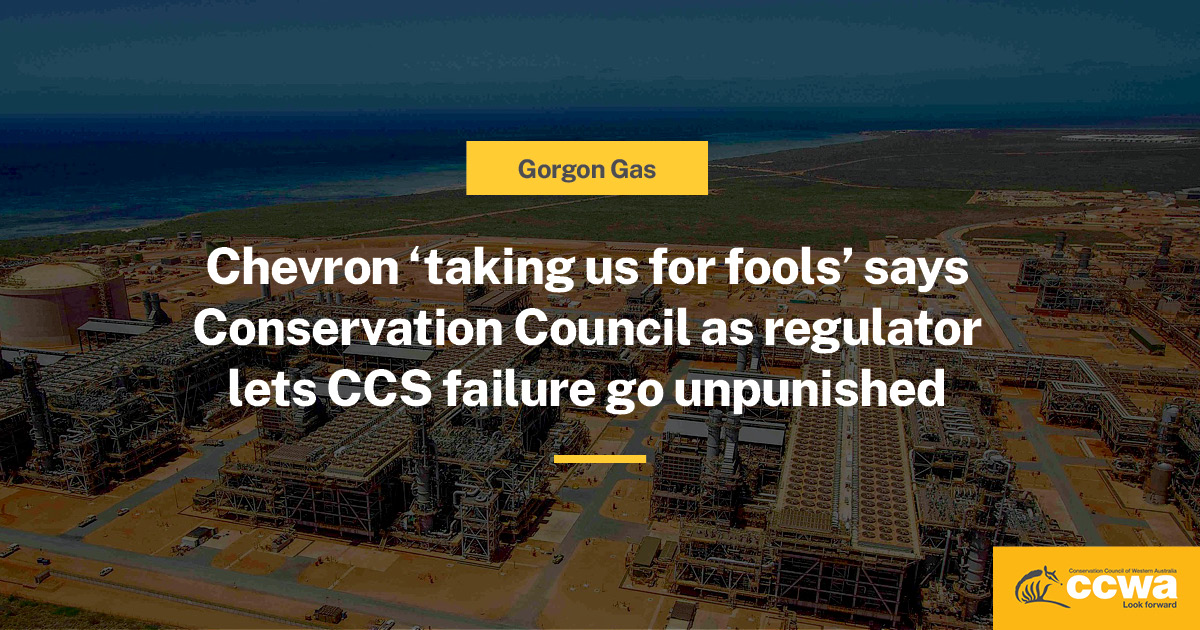 The Conservation Council of WA (CCWA) has described a decision by the Department of Water and Environmental Regulation (DWER) not to penalise Chevron for the failure of its Gorgon carbon capture scheme as ‘enormously disappointing’.

The WA state government has moved to apply a ‘notice of non-compliance’ which will carry no financial or regulatory penalties for Chevron, despite the company falling well short of its pledge to capture and store 80 per cent of the CO2 produced by its Gorgon gas project.

The site – located off North West WA – had been approved by the state government on the condition that Chevron commit to the world’s largest carbon capture and storage (CCS) scheme.

When the scale of the breach became clear in November this year, CCWA called on the state government to apply ‘a very strong penalty’ to reflect the seriousness of the five million tonnes of carbon pollution which Chevron failed to capture.

CCWA also called for the state to place a halt on all gas production at the Gorgon facility until the issues surrounding CCS at the site were fixed.

At the time, Chevron announced that it would purchase unspecified offsets to make up for the failure which stemmed from issues with their CCS plant on Barrow Island. According to recent reports, those issues still remain unresolved and Chevron has not committed to a time frame for completing the purchase of those offsets. Best estimates suggest Chevron managed to capture as little as 10 per cent of its original target, at Gorgon, through CCS.

Chevron made a total turnover of $4 billion AUD from its WA gas operations alone, last year.

Maggie Wood, Executive Director of CCWA, said: “Despite widespread condemnation of Chevron’s catastrophic failure to capture and store five million tonnes of CO2 from Gorgon, the WA government has chosen to issue little more than a slap on the wrist. This decision is enormously disappointing.

“Chevron has been operating this facility in breach of ministerial conditions for years – releasing enormous amounts of CO2 pollution and raking in billions of dollars in revenue.

“This is just another indication that CCS schemes do not work and are merely a smokescreen behind which big polluters can continue to expand and increase their highly damaging operations.

“Growth in carbon pollution from the gas industry has pushed WA’s emissions up more than 20 per cent since 2005, while every other state has reduced emissions.

“Western Australia’s biggest emitters must be held accountable. Chevron is taking the people of WA for fools and I know many will, rightly, be bitterly disappointed at the lack of action from the WA Government.”