The Lower West Coast Conservation Strategy for the Australian Fairy Tern provides a framework for the protection of Fairy Terns in the lower west coast area of south-western Australia.

The Strategy brings together a network of conservation organisations, government agencies, local authorities and community groups across an area covering the coastline between Fremantle and Bunbury.

The Australian Fairy Tern is one of Australia’s smallest and rarest seabirds, currently listed as threatened (Vulnerable) under the Commonwealth Environmental Protection and Biodiversity Conservation Act. The shoreline and beach-nesting behaviour of Fairy Terns, and the occupation of mainland sites, makes these birds vulnerable to a wide-range of threats.

It is currently estimated that there are fewer than 3,000 breeding pairs of Fairy Terns in WA. Of those, around 700 pairs breed in the Perth Metropolitan region. The area is subject to some of the most serious threats to the species, including increased coastal development; coastal recreational activities and predation from feral and domestic animals.

The strategy – which is the first of its kind - will provide a framework for each organisation and community group to help protect Fairy Tern colonies during the crucial breeding period.

The Lower West Coast Conservation Strategy for the Australian Fairy Tern was prepared by the participants in the WA Fairy Tern Conservation Network supported by a grant from Fremantle Ports.

The WA Fairy Tern Network was formed by the Conservation Council of WA (CCWA) in 2015 to coordinate a collaborative approach to protecting the terns. The Network has brought together voluntary researchers, observers and local community coordinators, staff from the region’s DBCA offices, the Department of Defence, the Ports, the Peel-Harvey Catchment Council, BirdLife WA and two relevant Local Governments in a coordinated approach to protecting the Australian Fairy Tern in this critically important region.

The Network is grateful to all those participants who have been prepared to commit their time and resources to the conservation of this threatened species. 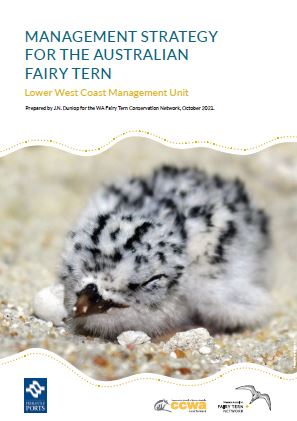