The RenewWA alliance, Conservation Council of WA, and Curtin University will hold a public forum this evening with international renewable energy and new industry development expert Professor Peter Droege, to discuss the potential for Western Australia and the town of Collie to transition from reliance on coal and gas towards a renewable energy future. 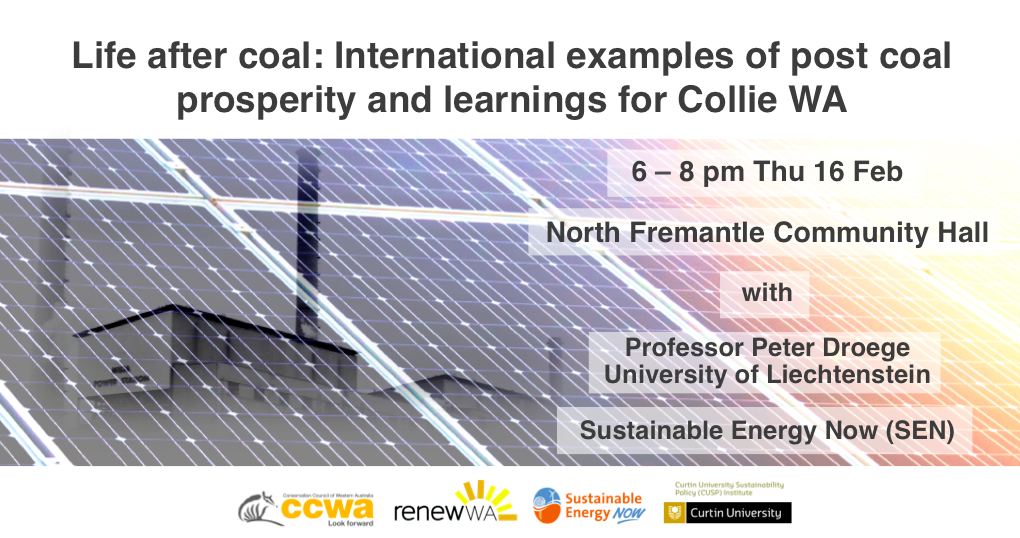 The forum will explore international examples where regional economic centres reliant on fossil fuel industries have been renewed and revitalised through a transition to renewable energy.

Collie has historically provided coal-fired electricity for the South West and Perth, however with an oversupplied electricity market, and uptake of solar panels on homes across Perth, the future of Collie’s coal industries is uncertain.

Professor Droege will provide examples of regional centres in Germany and elsewhere which have made a successful and profitable transition away from coal and towards renewable energy.

“With the right policy settings and the right political leadership, the town of Collie has the potential to be a thriving industrial hub for manufacturing and installation of renewable energy and related technology systems.

“Western Australia has far more potential for renewable energy than Germany with abundant solar, wind, and wave energy resources. These energy sources could power WA’s industrial economy, and the transition towards them could provide significant jobs and investment.”

The RenewWA alliance is the largest and most diverse coalition of organisations in WA history to call for action on climate change and a renewable energy transition for WA. The alliance includes unions, churches, doctors, environment groups, businesses, and other organisations.

A Climate Consensus Statement released by the alliance calls on all political parties to commit to action on climate change including a Renewable Energy Target, a ban on gas fracking, and a transition plan for Collie coal workers before the March 11 State election.

Professor Peter Droege has been an academic in Australia (Newcastle and Sydney Universities), America (MIT), Japan (Uni of Tokyo), and now at University of Liechtenstein. He has books on The Renewable City (2006), Urban Energy Transition (2008), 100% Renewable (2012), and has been a powerful leader of academic and policy-based research on how cities and regions can create good economic outcomes by moving to renewables.

Professor Peter Droege and the Liechtenstein Institute for Strategic Development pursue post carbon regions with local communities and regional governments. Peter is in Perth to share insight into his current initiative of devising structural change in one of Europe's largest brown coal mining regions, drawing encouragement and insight from similar developments elsewhere.