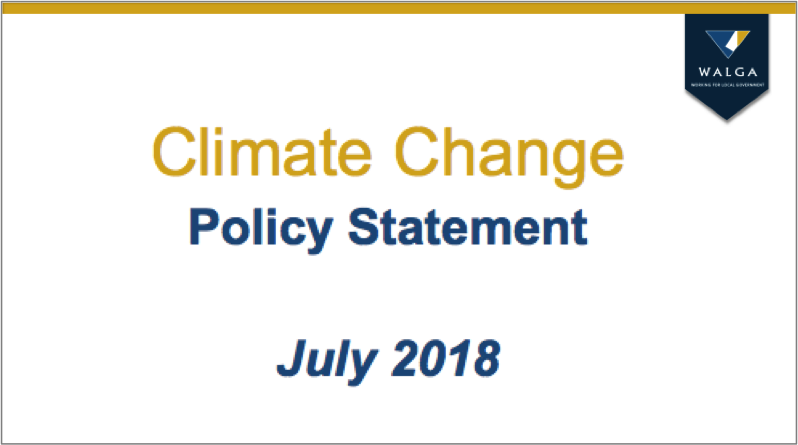 WA’s peak environment group has welcomed the release of a new Climate Change Policy Statement by WA Local Governments. Endorsed by the WA Local Government Association’s State Council last week, the statement calls for urgent action, and strong leadership and coordination at all levels of government.

As well as committing local governments to action, the policy calls for the McGowan Government to “undertake a major revision and update of the 2012 climate change strategy, which was put in place by the Barnett Government”, and for the EPA to “take a stronger regulatory role in assessing and recommending conditions to mitigate the GHG emissions associated with major projects”.

CCWA Director Piers Verstegen said Local Governments were at the coal face of climate change impacts, and the new policy put them at the forefront of climate solutions.

“Local Governments are already bearing the very real costs of rising sea levels, extreme weather events, and other impacts of climate change, so their voice should carry significant weight in climate policy.

“The commitment by Local Government to work towards limiting temperature increase to 1.5 degrees is strongly welcomed, however as the WALGA policy statement makes clear, this requires leadership from the State and Commonwealth Governments as well as action at the local level.

“WA Local Governments have made clear that it is not acceptable for the State Government to retain a policy on climate change which is an excuse to do nothing on the issue.

“The lack of a strategic approach to addressing climate change in WA means pollution growth in WA is now the biggest driver of Australia’s rising emissions, and will prevent Australia from meeting its international commitments under the Paris Agreement.

“Western Australia is the only state with no renewable energy target and no carbon pollution reduction target.

“This do-nothing approach is not only allowing pollution to rise rapidly, but is holding back our state from the jobs and economic benefits that could be attracted to WA as part of a new clean energy economy.

“We have abundant renewable energy resources, huge opportunity for carbon farming, world-class manufacturing and engineering expertise, and the potential for a high-value rare-earth battery industry.

“These are all areas of huge economic potential as part of a clean economy of the future, yet we currently lack the policy, strategy, and government support for these industries to realise this potential.