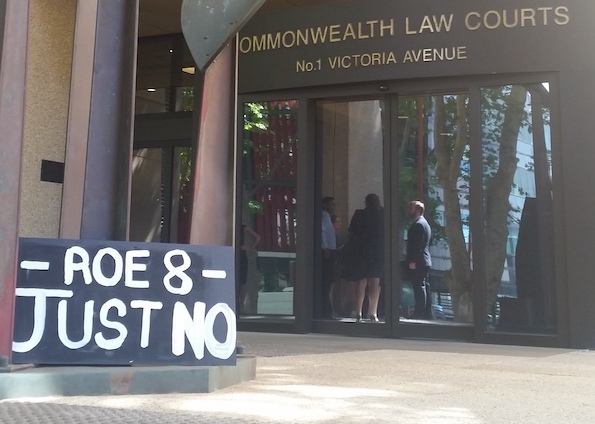 Members of the community gathered outside the High Court in Perth this morning, supporting Save Beeliar Wetlands in their bid to challenge the first stage of the $1.9 billion Perth Freight Link project.

While the High Court refused Save Beeliar Wetlands’ application for special leave to appeal against a Court of Appeal decision, community groups are undeterred and will continue to challenge the project due to the ecological and cultural significance of the ancient Wetlands.

Conservation Council of WA Director Piers Verstegen said, “The result is a setback, but with the community of support growing every day and an election just around the corner we won't be deterred.

“The hearing this morning once again revealed that the only way the Minister and EPA could approve the destructive Roe 8 project was by ignoring the EPA’s own policies on the protection of critical environmental assets.

“However, this was not enough to invalidate the Minister’s decision in the High Court.

“The Government’s defense rested on an argument that the WA Environmental Protection Act does not compel the EPA to follow its own policies.

“This decision highlights a fundamental inadequacy of environmental law in our State and points to a much bigger issue that needs to be fixed urgently.

“This is not the end of the road for the legal process to defend the Wetlands. There are proceedings underway to challenge the Federal environmental approval in the Federal Court.

“This means there is still a significant legal cloud hanging over this project.”

Save Beeliar Wetlands Convenor Kate Kelly called for the Government to stand down the contractors and stop any further destruction over the Christmas period and until the election.

“The Government does not have a mandate to go ahead with this project, and the chorus of community opposition is increasing every day.

“We call on the Government to stand down the contractors and let the police be with their families over the Christmas period.”